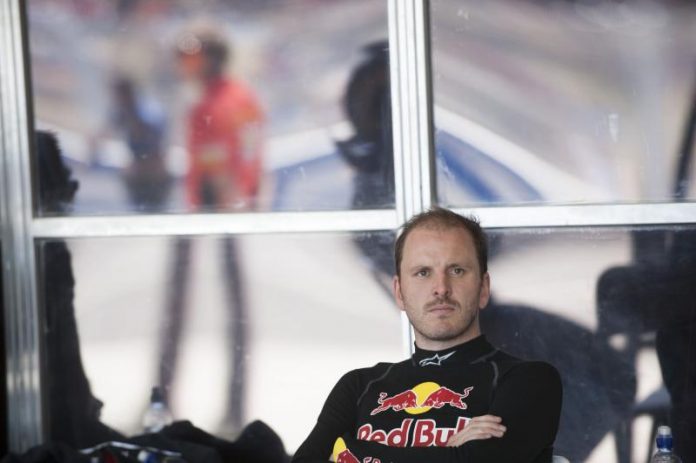 It’s something of a return to the series for Dumbrell, who won the 2002 series crown and was runner-up in 2001 in his inaugural season racing V8 Supercars.

Dumbrell, 31, will again pair up with Jamie Whincup for Red Bull Racing Australia in this year’s Pirtek Enduro Cup at Sandown, Bathurst and the Gold Coast and says his return to the Dunlop Series is a crucial part of his attack on the high-profile V8 Supercar races later in the season.

“I stopped driving V8 Supercars full-time at the end of 2011 and there’s absolutely no doubt you need to be doing some racing during the year to keep yourself sharp for those big races where there’s big pressure to perform,” says Dumbrell.

“That is exactly what joining Eggleston Motorsport is all about and it’s a no-brainer for me to join them to compete in the Dunlop Series this year.

“The fact they use Triple Eight-built Commodores mean I will be racing a machine as close as possible to the car I’ll drive with Jamie later in the year and Triple Eight’s John Russell is joining their engineering department, so it all connects well.

“The Eggleston team has been building into a serious contender in the series and are lifting the level higher in the category in all areas.

“I’ve worked very hard to make this Dunlop Series program fit in with my business commitments. It underlines how seriously I take the endurance races and how committed I am to Jamie, Roland Dane and Red Bull Racing Australia to perform well for them later in the year.

“There is absolutely no doubt too that the level of the development category has lifted enormously since I last competed in it back in 2002. I’m looking forward to Adelaide and getting back onto the track.”

Dumbrell has claimed a total of 15 race wins, 20 fastest laps, eight podium finishes and seven pole positions in the category, including a record clean sweep of all five pole positions available in 2002.

EMS Team Manager Rachael Wagg says the addition of Dumbrell is a massive coup for the Melbourne-based team.

“We are confident that his experience and sheer speed will give EMS a very strong chance to win races and challenge for the championship,” she says.

“Having a driver of Paul’s calibre is a significant addition to our team for this season.

“Paul will also be a huge asset to his team-mates at EMS, providing them with invaluable feedback and guidance gained from over a decade of exposure to the V8 Supercars Championship.

“We have worked hard with Triple Eight and Roland Dane to make this happen and we cannot wait for the season to get underway.”

The same car won the 2010 Supercheap Auto Bathurst 1000 in the hands of Craig Lowndes and Mark Skaife and set the fastest-ever V8 Supercar lap of Bathurst in Lowndes’ hands in practice earlier that weekend.

Dumbrell competed full-time in the V8 Supercars Championship between 2003 and 2011 and has since acted as endurance co-driver to five-time V8 Supercar Champion Jamie Whincup.

Eggleston Motorsport will run three, Triple Eight-built Commodores in the development category of V8 Supercars with Dumbrell and Shepparton pilot Garry Jacobson to be joined by a third soon-to-be-confirmed driver.