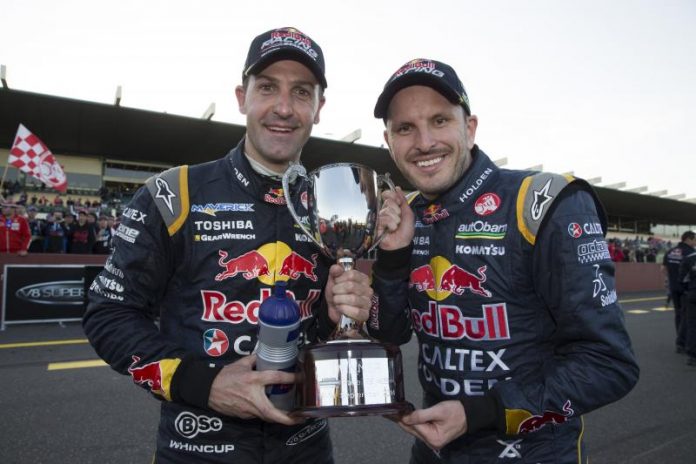 PAUL Dumbrell says his acquisition of a stake in Triple Eight Race Engineering won’t make for any significant changes in his on-going involvement in V8 Supercar racing in 2016 and beyond.

Dumbrell, formerly a full-time V8 Supercars driver between 2003 and 2011 and an endurance driver with Triple Eight since 2012, recently was announced to continue his driving relationship with Jamie Whincup in next year’s Pirtek Enduro Cup.

“Being a minority investor in the business my involvement will be fairly limited,” Dumbrell exclusively told V8 Sleuth this week of his buy-in to Triple Eight.

“I started to look over the last few years to widen my experience across the business world with a few other investments.

“My role at the Burson Group and ANA is a key focus and that will continue to be my focus.

“They’re a well-oiled machine on the motorsport side of things with Roland, Mark Dutton, their engineers and mechanics – I’ll stay well clear of that side of things.

“I’m not an engineer, the team have that skill set. I’ll add value if and when asked. It’s a great organisation, a great brand with great people so it was very attractive to get involved.

“It was an opportunity I couldn’t forego, the most successful V8 Supercar team over the last 10 years that has dominated the field.

“Being involved in the team over the last four years from a driving point of view I’ve seen up-close the quality of Roland, the team and its people.”

Dumbrell and Miles also have further common interests – along with former V8 Supercar team owner Terry Morris they are board members and shareholders in Tony and Thea Cochrane’s International Entertainment Consulting.

“Tony was clearly a visionary of V8s and many things before that and there was a great opportunity to get involved with he and Thea, the Morris family, Garry (Dumbrell, Paul’s father) and also Tim,” says Dumbrell.

“There’s been some great initial success. Tony and Thea are visionaries, their passion and enthusiasm is incredible. It’s a real pleasure to be involved with them.”

Dumbrell will be on track at Sydney Olympic Park this weekend in the final round of the Dunlop Series.

He currently sits second to Cameron Waters and is aiming to become the first three-time champion in the category, though has a 149-point deficit to Water to overcome with 300 points on the line in the pair of races this weekend.