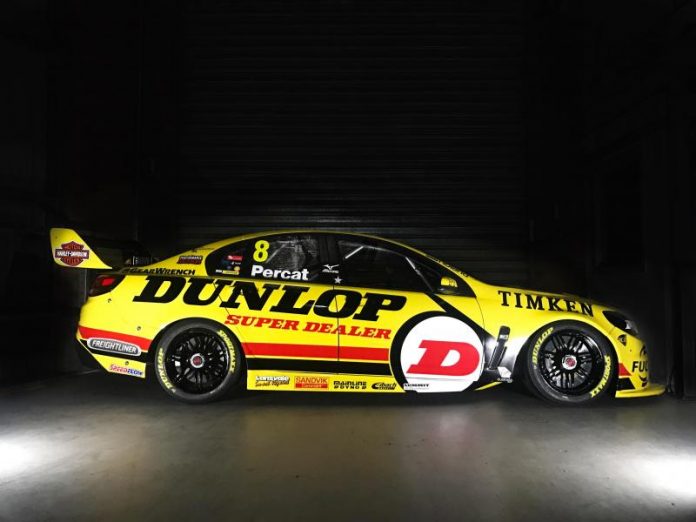 BRAD Jones Racing’s rotation of sponsors on its #8 Commodore will continue this weekend at Queensland Raceway where Dunlop Super Dealer will back the Nick Percat-driven Holden in the Coates Hire Ipswich SuperSprint.

Dunlop is the control tyre provider to the Virgin Australia Supercars Championship and has held the contract since 2002. It also supports the Dunlop Super2 Series as part of itsextremely long history in Australian motorsport.

“It’s always exciting to reveal the new livery before each event,” said Percat.

“The yellow on this is really bright and bold, it definitely won’t be missed on track.

“The Dunlop team that work with us at the track constantly engage with drivers and teams to ensure we’re getting the most of the tyres.

“At the end of the day our Dunlop tyres are what is in between us and the road, so performance and reliability is key. When you’ve got good tyres, it gives you confidence to push the car harder and make more passes. That’s what the fans love to see.”

Supercars fans wanting to meet Percat and the #8 Dunlop Super Dealer Commodore can do so at the Supercars Coates Hire Community Day, this Thursday 4pm-5pm at Coates Hire, 43 Lobb St, Churchill.

The Dunlop Super Dealer Commodore will hit the track Friday with Nick’s endurance co-driver Macauley Jones behind the wheel for the first outing, the additional driver practice session.