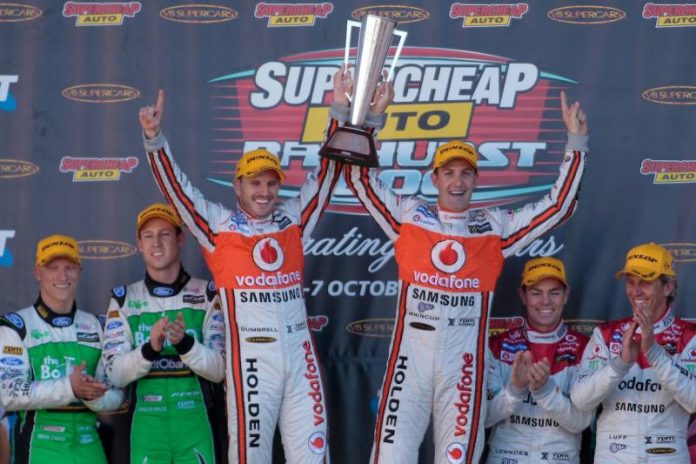 THE V8 Sleuth makes some interesting observations and comparisons between this week’s AFL Grand Final and V8 Supercars’ ‘Granny’ – Bathurst.

MELBOURNE town is pumping this week given it’s Grand Final week in the AFL.

And with that comes all sorts of stuff that whips those that love their footy into fever pitch – the big crowds at final training sessions, the Grand Final parade and of course the match itself.

Past Grand Finals are re-visited all week with the failures and losses covered just as much as the days of glory and premiership success.

One common theme that spreads throughout this week and the match result is the emotion from the losing side.

Often this week it will be said how a footballer never gets over the loss of a Grand Final or just how deep coming up short really cuts.

In some cases these stories are overstated, but the simple fact that when you pour a whole year of your life into achieving what very few do, then it places it into perspective as to how special the achievement is and how devastating losing can be.

Grown men, who pride themselves as brave battlers that smash into contests for the ball with no regard for their personal safety, are reduced to tears and zombie-like states as they watch their triumphant counterparts celebrate and collect the spoils of victory.

So that got me thinking.

Why don’t we see that in V8 Supercars at our ‘grand final’ at Bathurst?

I can’t remember the last time I saw the runners-up at Bathurst do anything but smile and wave and say all the right things about it being a great result etc.

Sure, if a newcomer in Nissan or Erebus’ Mercedes-Benz AMG finished on the podium at Bathurst in a few weeks that would be a great result in the context of where they have come from and the current climate of development in the category.

But at the end of the day, coming so close to winning the ultimate prize and not doing so should cut deep no matter your situation.

And when it does cut deep – don’t hide it.

Sure, in the scheme of a 1000-kilometre race with its ups and downs, just finishing is an achievement sometimes given the roller coaster ride that the Mountain provides over six hours on a Sunday in October.

But the chance to jag victory and the most important trophy in our V8 world comes rarely and only to a select few. It’s a point that seems lost to some. But why?

Not knowing whether I would ever get another chance to be in such a position to win that race would eat me alive.

Listen to the deflation and desolation in his voice on the tape from 1995 when his chances were snuffed out 10 laps from home.

Ask Brad Jones. 6 podiums – more than any other driver in Bathurst history without a win to his name.

Watch the video of the 1998 V8 race when partner Mark Larkham stops on the pit straight and spends agonising minutes trying to re-fire the car. The tears say it all.

Ask Neil Crompton. 15 starts – 2 podiums, some brilliant opportunities that went begging and the gut-eating feeling of unfinished business that will remain that way.

Watch the 1995 podium and you see a deflated driver that speared off at the Chase and felt he’d let his team down.

Ask Mark Winterbottom. He’s been to Bathurst 10 times and still doesn’t know where the podium is.

Watch the 2008 video and you can see the tears in his eyes as co-driver Steve Richards is passed for the final podium spot by James Courtney.

Chances to fight for the win in the closing laps in this most cherished, special and important of races are so bloody rare.

Winning on that grand stage defines a racing driver in the eyes of the Australian sporting public.

Win Bathurst and you live forever no matter where your life takes you.

Even the non-regular, casual sports viewers that tune into Channel 7 in October know that winning Bathurst is a big deal and to be respected and cherished. They’d understand a driver being devastated by not winning it.

Our V8 drivers get unfairly criticised for being boring, bland and never saying anything of interest or showing emotion. I have a strong belief relating to the circumstances relating to this topic and that they are not wholly to blame – but that’s for another column at another time.

But when they have a genuine reason to be emotive, devastated, gutted and despondent – and coming within inches of winning the biggest race of their life indeed is so – then show it.

It’s OK to be upset.

It’s OK to rue what could have been.

This isn’t about being negative. It’s about encouraging human emotion, about adding layers to our already great sport and race.

Grand Finals only come every 365 days. And that in itself is no guarantee that your team will make it back there for another crack.

Bathurst is the same. It’s once a year and there’s no guarantee your car, co-driver, pit crew or the Mountain itself will all work in unison again in your lifetime.

So if you finish second or third on the Mountain this year and don’t know the feeling of Bathurst victory previously, do me a favour and stop and consider the next three lines.

This is as close as you will ever get.

No other race matters.

And then see how you feel about it.

Watch this weekend’s AFL Grand Final and you’ll understand how brilliant and devastating sport can be all at the one time.

And go the Hawks.