Home News ENFORCER AND THE DUDE PARKED UP FOR THE MOMENT

UPDATED: RUSSELL Ingall and Paul Morris’s regular internet-based motorsport program is parked up and on hold for the moment, though the duo hope to return later this year.

Launched last year, ‘Enforcer & The Dude’ picked up a hardcore following online, however little has been said in recent months as to their plans for 2020.

Ingall added some further insight this week when he posted on social media that he and Morris may do a ‘pop up’ episode or live feed at some stage this year.

“Recently, we have had a lot of messages and comments asking when Enforcer & the Dude will be returning,” he wrote.

“The reason that we haven’t answered any of these is not because we are ignoring the fans, but we don’t currently have any answer.

“My vision for the show was always about filling the large gap that existed explaining aspects of motorsport without an agenda by a couple of guys that have actually done it and know motorsport. Also to quietly prove a point that I believe we achieved.

“As we have said previously, the show took a lot of both time, but also money to produce and not an easy task without having the massive resources like other organisations.

“Where to take it from there was always going to be the next challenge and on what platform to share it and that is what we were working on prior to the current crisis. Obviously, things have been put on hold until we see how everything plays out.

“In today’s current global crisis, not only is there no racing going on around the world to talk about, but companies are all dealing with the priority of running their businesses and keeping people employed in these trying times. As a result, sponsorship is low on the priority list which is understandable.”

Ingall, the two-time Bathurst 1000 winner and 2005 V8 Supercar Champion, spent four seasons with FOX Sports between 2015 and 2018 before being replaced by the network in favour of the retiring Craig Lowndes.

His last Supercars start came alongside Rick Kelly as co-driver in the Sengled Nissan Altima at the 2016 Gold Coast 600.

Morris continues to run the Norwell Motorplex, manage Anton De Pasquale and work with a range of drivers in the junior ranks, including 2019 Kumho Super3 Series winner Broc Feeney.

SMASHED SUPERCAR RE-BORN – AS A SIM!

THE BATHURST SHUNT THAT PROMPTED GARDNER TO RETIRE

WHAT HAPPENED TO MOFFAT’S 1973 BATHURST-WINNING FALCON? 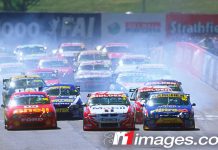