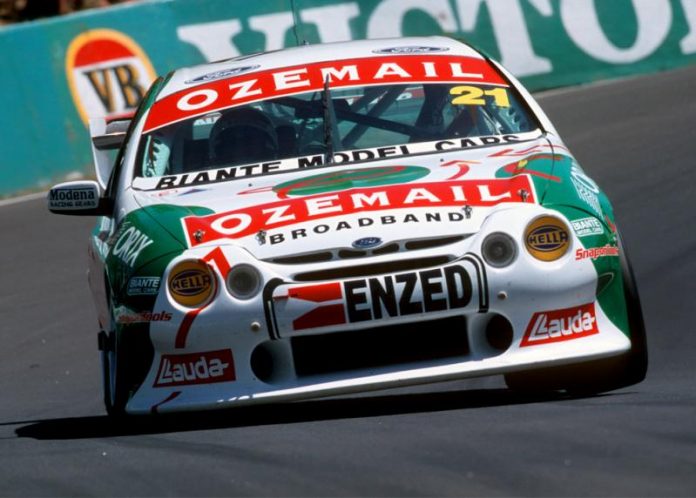 This Falcon was a Bathurst record breaker and Konica Series winner …

OUR latest ENZED Classic Cars feature focuses on a Falcon that was lightning quick at Bathurst and gave a young gun the Konica Series (now Super2) crown after the closest season ever – Andrew Jones’ 2004 Team BOC Falcon AU.

Brad Jones Racing originally built this particular car for the 2002 season, the second Falcon built by the team for its first year as a two-car squad.

The car made its racing debut with Brad Jones at the helm as the #21 Ozemail entry at the 2002 Clipsal 500 in Adelaide and was driven by the former Thunderdome star for the entire ’02 season.

Its best round result of the season came at Barbagallo where Jones finished seventh overall, however it was every inch a contender in the two endurance races where his full-time teammate John Bowe joined him as co-driver.

Bowe shone bright at Mount Panorama, topping qualifying to become the fastest man in a touring car around Bathurst to that point in time. They were fast on race day but delayed with suspension dramas and finished 16th.

Jones finished off the season in this Falcon and the team retained the chassis in 2003 when it was driven in the Konica Series by Brad’s nephew Andrew.

He won the Winton round of the series in ’03 but went even better in 2004 when he took the re-liveried Falcon to the overall series win with round wins along the way at Eastern Creek and Winton and podiums at Queensland Raceway and Mallala.

In fact, Jones finished the season tied on points with Luke Youlden, however won the title on a countback by virtue of his Eastern Creek round win – this remains the only tie in a series or championship in Supercars history.

Following a one off appearance in the HPDC Series in ’05 with Dale Brede at the wheel it was sold off in New Zealand for use in endurance events before it was again sold to fellow Kiwi Craig Corliss.

He raced it in a variety of series in the years that followed, including the GTR NZ series that ran as a support to the ITM Hamilton 400 V8 Supercar street race on occasion.

He returned it to its original Ozemail colours and won the 2011 NZ GT1 championship before it was taken to Thailand and raced in the Thai Supercar Championship.

Eventually this car was sold to a Melbourne-based collector where it remains today – we look forward to seeing it back out and about sometime in the near future!

Join the ENZED Motorsport Club here now to go into the draw to win an all-expenses paid driving experience at the Norwell Motorplex in Queensland in October.