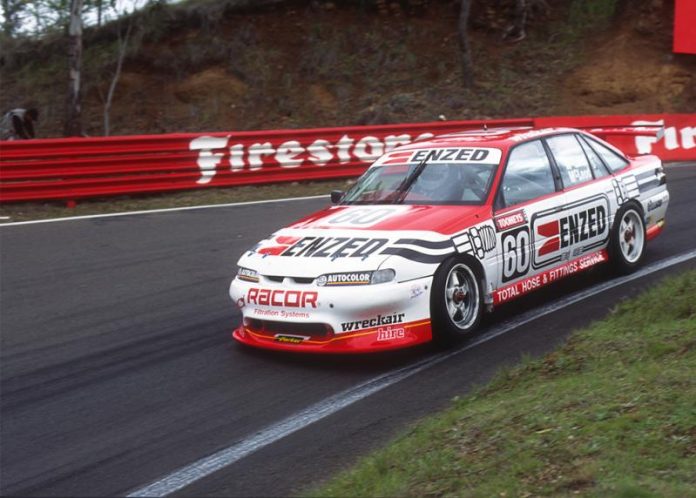 This ENZED-branded beast had a long history and, in an earlier life, helped launch a legend of the sport …

THIS edition of ENZED Classic Cars features a Commodore with a long racing history that was steered by some of the sport’s best and became a privateer racer for two Bathurst 1000 starts – Peter McLeod’s 1995/1996 ENZED VR Commodore.

Appropriately, the car wore ENZED colours for its Bathurst outings with McLeod, who was joined by son Ryan for their team’s debut race meeting at the 1995 Tooheys 1000.

McLeod, a former Bathurst winner alongside Peter Brock in 1987, purchased the car from the Holden Racing Team midway through 1995 in readiness for Bathurst with the Commodore originally built by the famous squad back in 1991 as a VN model.

He also purchased a VP race car from privateer Stuart McColl and set about installing its running gear into the ex-HRT chassis in the lead up to The Great Race.

The weekend proved disastrous with a wheel falling off during Wednesday practice that sent McLeod Snr on a wild rollover in Caltex Chase and, after a massive repair job, a tailshaft left them stranded on the grid when the race started on the Sunday.

McLeod ran the car in selected rounds of the 1996 Australian Touring Car Championship before the father/son team reunited for the AMP Bathurst 1000 year – the pair lasted 85 racing laps this time round with engine issues bringing their time with this car to an end.

While it had an ultimately unsuccessful privateer life, many may not realise that this was the car that Supercars star Craig Lowndes used to launch around the outside of John Bowe at Griffins Bend in the closing stages of the 1994 Tooheys 1000 at Bathurst!

The car originally debuted in the 1991 Bathurst 1000 as a VN Commodore with HRT pilots Allan Grice and Win Percy at the wheel, the pair coming home second behind the Nissan GT-R of Mark Skaife and Jim Richards.

It didn’t race at Bathurst 1992 and sat idle for just shy of 12 months until late May 1993 when it was called upon to return to racing duty after Tomas Mezera crashed another HRT chassis at Winton.

Mezera used it to take podium finishes at Mallala and Oran Park before joining Percy for Bathurst, where the throttle jammed and sent the Englishman head-on into the guardrail at the bottom of Conrod Straight.

The 1994 season saw the famous #05 added to its door for Peter Brock, who made a successful debut with HRT in the opening round at Amaroo Park with a podium finish.

Brock rounded out the sprint race-based series third in the points and this chassis was turned over to Brad Jones and Craig Lowndes for the Sandown 500 and Bathurst as #015.

Following its memorable Bathurst in ’94, the car was updated to VR specification for 1995 with Tomas Mezera driving it in the early rounds of the season before he received a new chassis.

Following McLeod’s time with the car it was passed on to Simon Emerzidis, who ran selected events, before Garry Willmington drove it in its last V8 Supercar race appearance at Phillip Island in 1999.

The Commodore is now a stripped bodyshell in the hands of a Melbourne collector and is unlikely to ever be return to its original HRT condition given that so little of the original car and its components remain – sad huh!

Join the ENZED Motorsport Club here too to go into the draw to win an all-expenses paid driving experience at the Norwell Motorplex in Queensland in October.