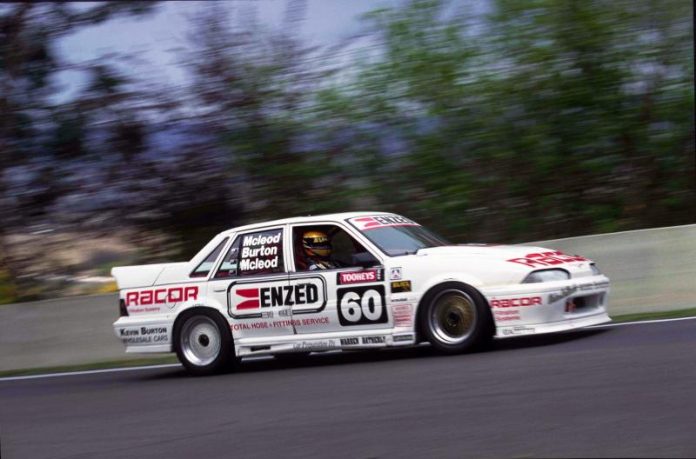 TODAY’S edition of ENZED Classic Cars features an ENZED-branded beast that gave a young driver his Bathurst debut and is currently being bought back to life – Peter McLeod’s 1994 ENZED Australia VL Commodore.

Appropriately, this car wore ENZED colours for its Bathurst outing in 1994 with now MARC Cars Australia owner Ryan McLeod making his Bathurst 1000 debut aboard the Commodore alongside his father Peter and co-driver Kevin Burton.

The trio had a tough race day at Mount Panorama and were out of The Great Race after only 83 laps following an accident at the top of the circuit.

While we have focused on this car given its ENZED history, this particular car was perhaps better known for its time in red colours.

The car made its first Bathurst start in the 1990 Tooheys 1000 as a Bob Forbes-run GIO car with Mark Gibbs and Rohan Onslow at the wheel – the pair finished 13th that day.

It returned to competition only weeks later for the first-ever touring car race at Eastern Creek – the Nissan Sydney 500 – with Gibbs and Onslow failing to finish the one-off endurance race.

The car later appeared with privateer Mick Donaher in various colours (including the multi-coloured Mocopan Coffee livery in the 1993 endurance races) before becoming the ENZED Commodore with Peter McLeod for Bathurst ’94.

The car was retired from professional racing duties following that particular race and has rarely appeared in public since then.

However, that’s about to change with the car now owned by collector David Holc, who now has both surviving GIO VL Commodores given he has owned and raced the sister car (driven by Kevin Bartlett and Russell Ingall at Bathurst in 1990) for some years.

“The (ENZED) car was owned by Doug Pieper who only did a few club meetings in it,” Holc told V8 Sleuth.

“We kept in touch over a long period of time and about two years ago we did a deal and I bought the car.”

Holc plans to return the car to the track where it will be reunited with its sister car in the Heritage Touring Cars category for Historic Group A and C touring cars.

“I’ve been doing the restoration on it since I purchased it, which has been quite easy due to its excellent condition,” says Holc.

“It’s had slight body repairs done and now I’m almost certain it will be finished mid-way through next year with the aim to have it at Historic Sandown.”

There you go, a great car from ENZED’s motorsport past is coming back – while it will be restored in its GIO colours, it’s still fantastic to know that this cool muscle car of the 90s is coming back to the track in the near future.

Check out the rest of our ENZED Classic Cars stories here.

Join the ENZED Motorsport Club here to go into the draw to win an all-expenses paid driving experience at the Norwell Motorplex in Queensland in October.