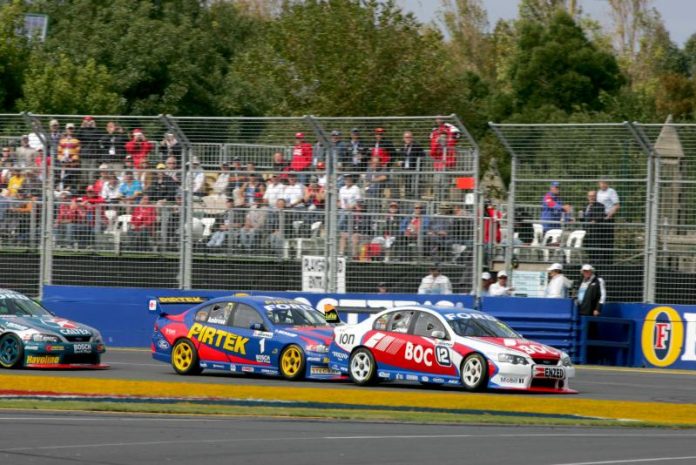 TODAY’S edition of ENZED Classic Cars takes a look back at a car that took its one and only Supercars win in a memorable one-two finish for Brad Jones Racing – John Bowe’s 2005 #12 Team BOC BA Falcon.

This particular BJR Falcon is best known for taking the team’s first Supercars race victory (and first 1-2 finish) in Race 2 at the then non-championship Australian Grand Prix support races at Albert Park in 2005.

Join the ENZED Motorsport Club here to make sure you enter to go into the draw to win an adrenalin-charged day at Queensland’s Norwell Motorplex.

The race started in damp conditions with both Bowe and teammate Brad Jones the only cars on dry tyres, a move that paid off as the pair sliced through the field to come home first and second.

It was a day in stark contrasts to some that would follow for this particular car during its active racing life.

This particular car was BJR’s third BA model Falcon and debuted in Bowe’s hands at the 2004 Australian Grand Prix.

Interestingly the car was unveiled in the team’s regular white and green OzEmail livery normally carried by team co-owner/driver Brad Jones, but due to a outcry from fans it turned up instead in Adelaide in Bowe’s regular black and green colours.

Bowe ran the car for the entire ’04 season and took two top-five round results at Hidden Valley and Barbagallo before teaming up with Jones in this car for the endurance races at Sandown and Bathurst.

The BJR drivers enjoyed a strong Bathurst outing and the pair claimed the team’s second Great Race podium, crossing the line third behind winners Greg Murphy and Rick Kelly and the Falcon of Craig Lowndes and Glenn Seton.

Bowe again raced the car for the entire single driver portion of the 2005 season, before it was turned over to endurance drivers Dale Brede and John Cleland at Sandown and Bathurst.

The Falcon returned for its third year of service in 2006 (this time with Stone Brothers Racing engine power given BJR had done a deal with the Queensland Ford squad) with Bowe again at the helm.

He made his 200th ATCC/V8 Supercar Championship round start aboard this car at Pukekohe in New Zealand, but it sadly turned sour when the car hit the barriers in Race 2 when the throttle jammed – the resultant collision with the fence broke photographer Scott Wensley’s leg!

This chassis was parked at the end of this round and didn’t appear in a race again in ’06.

It was upgraded to BF specification in time for the 2007 championship and taken over by Andrew Jones to drive in his first full-time season in the main championship with his family-run team.

The Albury-based team switched to Holden Commodores for 2008 and this Falcon sat around until it eventually found a new home with Wayne Russell in 2010 with his son Drew driving the car in that year’s Fujitsu Series.

The car returned to racing service in 2012 with the Russells running the car for driver Michael Hector as part of a three-car team operation.

Kumho Series driver Matt Palmer acquired this car in late 2013 and it competed in a few rounds of the series in 2014 with Drew Russell and Gerard McLeod. Russell wheeled it out later that season for himself to drive at the Phillip Island Kumho round after an accident in his sister ex-BJR chassis during the meeting ride session.

Our featured car ran for the last time on Australian soil at the Sydney Motorsport Park round in 2014 before it was sold off to Kiwi Richard Atkinson and sent to its new home in New Zealand.

The car now sits in its 2004 Bathurst livery and was recently seen out at the SKOPE Classic at Mike Pero Motorsport Park in New Zealand.

Read the rest of the stories in the ENZED Classic Cars series here on the V8 Sleuth website.