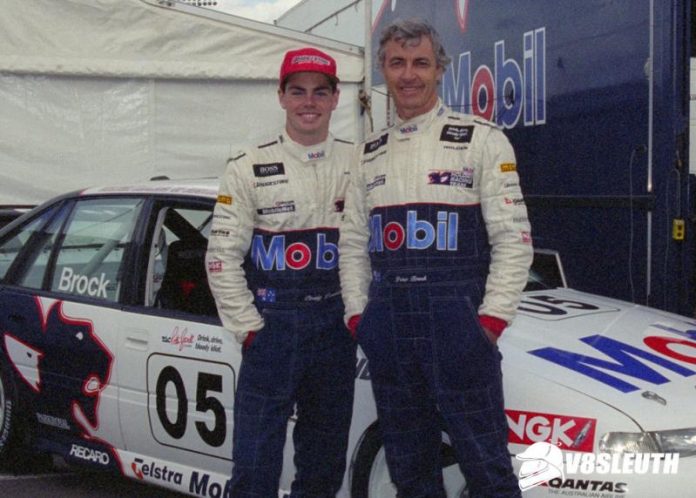 THE former team manager of the Holden Racing Team concedes that he still holds regrets over his treatment of star drivers Peter Brock and Craig Lowndes.

The latest edition of Australian Muscle Car magazine features Jeff Grech in its Muscle Man profile, the motorsport veteran who was recently appointed as the manager of Winton Motor Raceway.

Grech ran HRT during its glory years, and was pivotal to ushering Lowndes into a co-driver role with the squad that turned into a full-time drive in 1996.

While Lowndes memorably swept all before him in that record-setting debut season, Brock felt increasingly alienated by the team and announced his retirement during 1997.

“Brock felt left out of it, and I probably didn’t handle it all that well to be honest,” Grech told AMC.

“Being as young as I was as a team manager and having Craig just jump in and win race after race, you start to forget about the other driver.

“Craig was young and we saw an opportunity. And his feedback in testing was tremendous. At that stage, to be fair to Peter, data acquisition was starting to come in and I think he found it hard to work with young engineers.”

In a twist of fate, testing was also a pivotal chess piece in the latter days of Lowndes’ time with the team.

Lowndes recently pointed to a Phillip Island testing session in mid-2000 – one where Glenn Seton had his career-changing crash – that HRT hadn’t told him about as playing a key role in his decision to leave the team at the end of the year.

“We probably shouldn’t have, but we then shut him out of testing,” Grech told AMC.

“I blame myself, but it’s a natural thing for a race team to do because you’re protective of your performance.

“I live with that every day; both Brock and Craig. I’m just fortunate that Craig and I have reconciled,” he said.

In the eye-opening interview, Grech reveals some of the angst behind the scenes of Holden’s failed factory tilt at Bathurst in 1988, why the Nissan GT-R was a “mechanic killer,” and Tom Walkinshaw Racing’s ‘Plan B’ forwhen Holden decided it was pulling the plug on the Holden Racing Team at the end of 1995.

AMC issue #107 also tells the story of a barn-find Holden Torana A9X that raced in the 1979 Hardie-Ferodo 1000 which has sat in a self-storage garage for the past 15 years, and tells the story of the last Ford Mustang to race in the Australian Touring Car Championship prior to the Supercars-spec Mustang’s arrival on the 2019 grid.