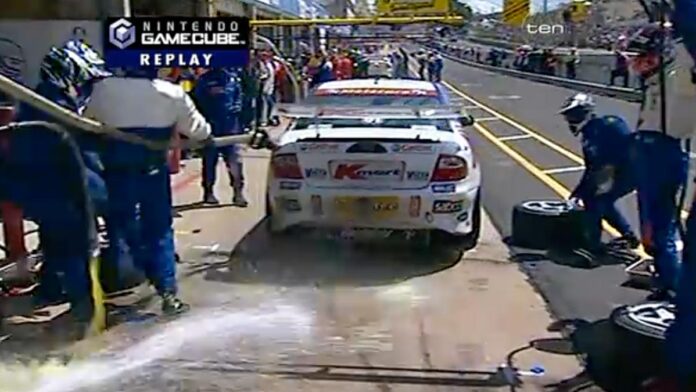 FORMER Kmart Racing Team Manager Rob Crawford has rubbished suggestions that the infamous five-minute penalty given to his driver Greg Murphy at Bathurst in 2002 was a by-product of the team refueling its cars while they were on the ground in the pit lane.

Former Kmart Racing engineer Barry Ryan made the comments during a recent episode of the V8 Sleuth Podcast Powered by Repco.

“At some point during the weekend we decided we were going to drop the car while the fuel was still going in so it flows better – because the car’s lower – and the driver’s not going to drive off,” Ryan said.

“Unfortunately, the car got dropped and the driver drove off…”

The possibility of such a thing happening again has been reduced in the modern Repco Supercars Championship given the rule that requires all cars to be up on their air jacks while refuelling is being undertaken.

Crawford, who was Team Manager of Kmart Racing from its creation in 2001 through its HSV Dealer Team and Toll HSV Dealer Team banner changes to the end of 2007, scoffed at Ryan’s version of events.

“It’s complete crap to suggest that we dropped the car to refuel it quicker,” he told v8sleuth.com.au this week.

“That never happened at all. I received a bunch of text messages after the story and podcast was published from former Kmart team members who all agree with me.

“I left my car controlling job for that race to Barry and when it came to race day it was a pretty simple plan. We’d fill up with fuel every 32 to 34 laps, change the brake pads between laps 60 and 70 and change them again at around lap 120. This strategy was to make sure the brake pads were only a third worn to make it easier for the mechanics to complete the brake pad stops with minimal fuss.

“So, if we could do all that, stay out of trouble, then hopefully we’d be in the lead pack to run for the win.

“But what actually happened at that stop was that Barry had instructed the mechanics were not to change the brake pads until he personally checked them. That was mistake number one. If he’d stuck to the plan, he never would have left the front of the car and the car would never have been released with the fuel hose still attached.

“The guy on the spike made a mistake and dropped the car, so with no car controller standing in front of Greg (Murphy) he just left the pits as per normal.

“If Barry had followed the strategy as he was instructed to, it would have been a whole different story.

“When you make a mistake, you should stand up and own the mistake.”

Ryan left Kmart Racing after 2002 and joined Perkins Engineering, while Crawford and the Kmart team returned to Mount Panorama 12 months after the five-minute penalty and claimed victory in 2003 in the wake of Murphy’s famous ‘Lap of the Gods’ pole position lap on the Saturday afternoon.

Ryan is the CEO of Erebus Motorsport and Part 2 of his interview on the V8 Sleuth Podcast Powered by Repco covering his time at the Erebus team has now been released here.