Home News EX-SKAIFE GT-R UP FOR AUCTION IN JAPAN 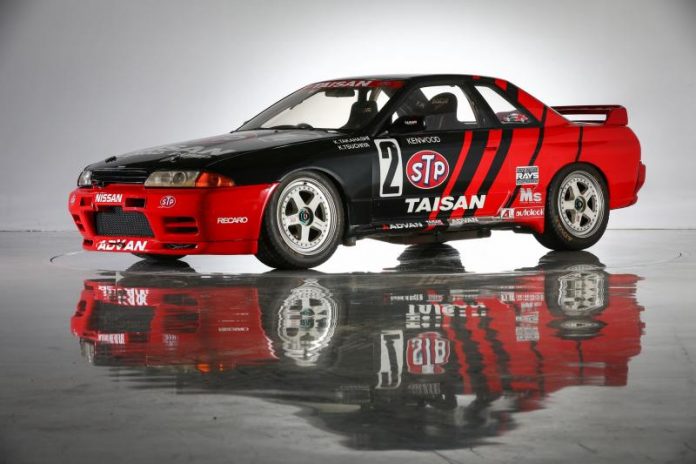 A NISSAN Skyline GT-R raced by Mark Skaife is set to be auctioned off this weekend among a host of exotic race machines in Japan.

Team Taisan has been at the front line of racing in Japan for most of the past 40 years, triumphing in sports car racing, touring car racing, and GT racing both at home and around the world.

The team has put up for auction a host of memorabilia, parts and racecars owned by the squad, including a Lola T94/00 IndyCar that finished eighth in the 1996 Indianapolis 500, a race-prepared Ferrari F40, and a pair of its former Super GT race machines.

The GT-R has an Australian link having been raced by Mark Skaife, the only one he piloted that wasn’t built by Gibson Motorsport.

Skaife raced the car at the 1991 Macau Grand Prix in the Guia touring car support race, an event that, in the Group A touring car era, traditionally drew strong entries from Europe to take on teams from Japan and South East Asia.

After dominating the 1990 race the GT-Rs were slugged with a 140-kilogram weight penalty, while the BMW and Mercedes-led opposition were allowed to race in full DTM-spec.

Hasemi used the GT-R’s horsepower and four-wheel-drive to beat pole man Emanuele Pirro’s polesitting Schnitzer Team BMW M3 off the line, but the Italian slipped past a lap later into a lead he wouldn’t lose, the No.1 GT-R fading to fourth by the finish.

Skaife was running in a steady sixth place when a mechanical issue sent him into the pits after just 10 of the 30-lap distance.

“There was an electrical misfire and although I came into the pits a few times we just couldn’t pinpoint the problem,” Skaife told Auto Action at the time.

Watch the full 1991 Macau Guia Trophy race in the video player below.

The car was the team’s first GT-R, built brand new at the start of 1991 by NISMO but raced in the Japanese Touring Car Championship without further factory support.

The car was driven by Kenji Takahashi and drifting legend Keiichi Tsuchiya, with Skaife reported at the time as joining them for the final round of the championship at Fuji.

The black and red Nissan retired from its first race but scored a pair of seconds and a pair of thirds to give Tsuchiya fifth in the championship from Takahashi – the pair equal on points, but Tsuchiya finishing higher after driving more laps over the course of the year than his co-driver.

According to the auction listing the car’s JTCC history ended after one season, but the car went on to tackle the South East Asian Touring Car Championship in 1993.

The auction will take place at on November 17 during the Suzuka Sound of Engine festival, a major historic race meeting that celebrates classic race machines from a variety of eras.