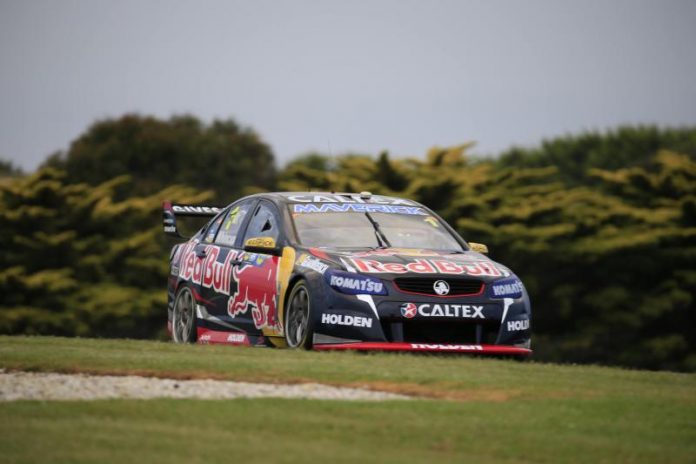 TRIPLE Eight Race Engineering boss Roland Dane has three new stakeholders in his powerhouse V8 Supercars business – and one of them is a former Bathurst winner.

V8 Sleuth can exclusively reveal that 2012 Bathurst 1000 winner Paul Dumbrell is among a buy-in of the Brisbane-based team that was finalised just after September’s Sandown 500.

Dane retains control of the team that will run three Holden Commodores in next year’s V8 Supercars Championship for the first time with drivers Craig Lowndes, Jamie Whincup and Shane van Gisbergen.

He told V8 Sleuth exclusively today of the thought process behind the decision to sell part of the business.

“I’d taken the decision with myself 18 months ago to start looking at what happened in the event that I was incapacitated,” Dane told V8 Sleuth.

“I thought I owed that to everyone here including my younger daughter Jessica, who was working here at the time and has just come back to work here.

“I thought I needed to think of the long term but I did very little about it despite having several people asking me about the possibility of being involved.

“I really didn’t do anything about it until the early part of this year when one of my oldest and closest friends was diagnosed with bowel cancer. That made me wake up and realise and I had to get serious about having some sort of contingency plan for the business.

“Tim and Paul were showing an interest in being involved and represented the sort of people I was happy to have involved because, whilst they are for want of a better term ‘silent partners’, if I am not here they will be able to step into the breach from a motor racing and business point of view.

“That was the motivation, no more, no less.”

Dane says the change in structure of the ownership of the business has no effect on his commitment or his focus on V8 Supercar racing.

“I’m as committed to being here as I ever have been, especially with Jessica back in the business and wanting to be involved in the long-term future,” he says.

“My personal base in Australia is as strong as it’s ever been.

“Nothing has changed day-to-day. Having some silent partners hasn’t changed the control of the business. I’ve had to commit to the other shareholders to being here as managing director for a minimum of five years anyway and if I get my way it will be a lot longer than that.”

Dumbrell was formerly a full-time V8 Supercars driver between 2003 and 2011 and has been an endurance driver with Triple Eight since 2012.

It was recently announced he will continue his co-driving relationship with Jamie Whincup in next year’s Pirtek Enduro Cup.

He has continued to race in the Dunlop Series in a Triple Eight-built Commodore for Eggleston Motorsport and sits second in the pointscore entering the last round in Sydney next weekend.

“Being involved in the team over the last four years from a driving point of view, I’ve seen the quality of Roland, the team and the people,” Dumbrell told V8 Sleuth exclusively.

“The Triple Eight family has given me a lot of success over the last few years and I would love to play some part in ensuring I can add a small bit of value over time through my business interests and away from motorsport.”

Click here for more from Dumbrell on his buy-in of the team.

Miles was formerly a partner in Tasman Motorsport, the Sydney and later Melbourne-based V8 Supercar team that was born out of the old Lansvale Racing Team that ended up closing its doors at the end of 2009.

Originally from New Zealand but now based in Sydney, Miles is a regular competitor in the Porsche GT3 Cup Challenge and drove an Aston Martin at this year’s Australian GT round at Sydney Motorsport Park.

His business – Miles Advisory Partners – acted as advisor to the shareholders of V8 Supercars when it sold controlling interest to Archer Capital in May 2011.

It also acted as advisor to Automotive Brands Group in 2012 when Metcash Limited purchased a controlling stake in the business and then to Burson Group Limited this year when it in turn acquired Metcash Automotive Holdings.

Schipkie is Managing Director of the Schipkie Group of Companies, focused on the marine and resources sectors both in Australia and overseas.

She was connected to purchasing a stake in Triple Eight Race Engineering in July last year after attending V8 Supercars rounds as a guest of the team.

“Trinny is locally-based, a passionate supporter of the team who wanted to have an involvement and was happy to be a silent partner in the team, so that’s what she is,” added Dane.