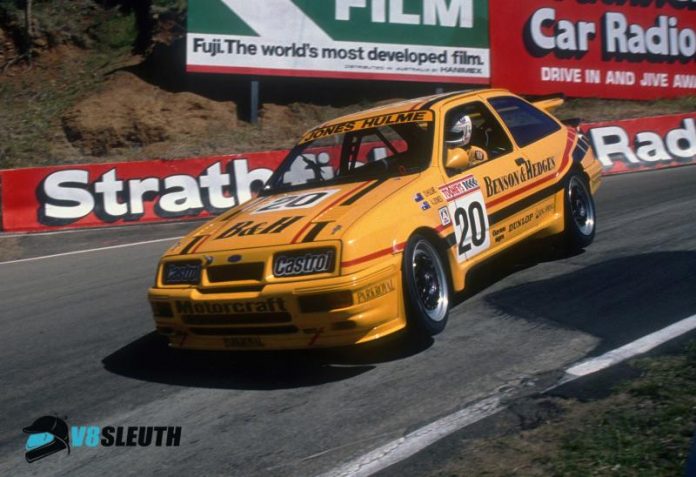 THE former Benson & Hedges Ford Sierra RS500 of 1980 Formula 1 World Champion Alan Jones will return to the Heritage Touring Cars Series in 2018 in the hands of racer and collector Chris Stillwell.

Stillwell has purchased the car to replace the ex-DJR Sierra he’s campaigned in previous years that was recently sold to long-time Ford competitor Terry Lawlor.

The Benson & Hedges car was acquired from a private collector in New Zealand, who has owned the car since purchasing it from Tony Longhurst in 1990 following the Wellington street race.

Not raced since 1990, the museum-bound car reportedly completed only a handful of races in its short competition life.

The car is the second of two Sierras the Longhurst team sourced from Wolf Racing. Designated WR002 it was used by Jones and Denny Hulme in the Tooheys 1000 at Bathurst on two occasions, finishing fifth in 1989 (when Longhurst joined them after his original car failed) and failing to finish in 1990.

Jones used the car throughout the 1990 Australian Touring Car Championship season before it travelled with the team to Wellington for that year’s harbourside street race in the hands of Longhurst and Kiwi Paul Radisich and finished sixth.

The car was a retirement from the Pukekohe 500 a weekend later and, looking to avoid the customs duties that would accompany the car if it returned to Australia, the 1988 Bathurst winner instead elected to sell the car at the end of the weekend’s racing.

The exiled Sierra recently arrived back in Australia and sits within the Stillwell’s Melbourne workshop awaiting a full rebuild by team chief Euan McDonald before returning to the track in 2018.