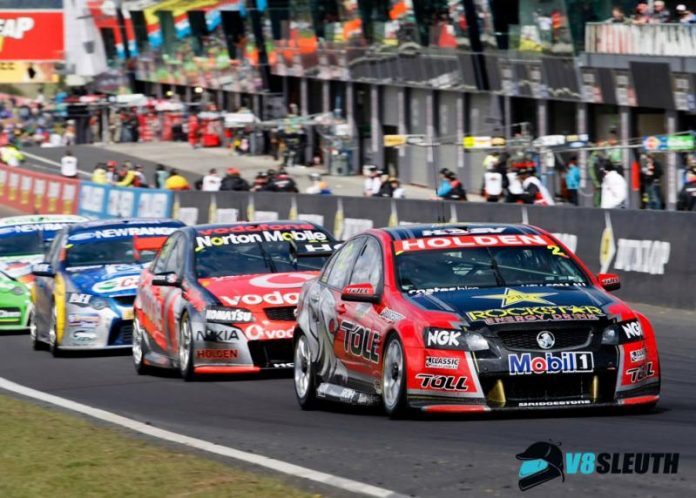 BATHURST-WINNING race cars are sought-after pieces of history for car collectors and that has been underlined by the fact that one of them is heading to a new home overseas.

Executive Director of the McLaren Technology Group, Zak Brown, has acquired the car driven to victory at Mount Panorama by Garth Tander and Nick Percat to add to his impressive stable of racecars.

The newest addition to his collection – chassis WR 014 – is featured in the V8 Sleuth’s soon-to-be-released ‘HRT The Cars, 1989-2016’ collector’s edition book that can be pre-ordered hereand was debuted by Tander in late 2010 and raced by the three-time Bathurst victor through the 2011 and 2012 V8 Supercar Championship seasons.

He and Percat won the 2011 Bathurst race in a nail-biting finish, Tander holding off Craig Lowndes in an epic finish by just 0.29-seconds – at that stage it was the closest finish between competing cars in the race’s long and storied history.

Percat’s win came in his very first attempt at the Bathurst 1000 and he became the first rookie since the great Belgian champion Jacky Ickx (who won in 1977 with Allan Moffat) to win Australia’s ‘Great Race’.

Returned to its 2011 Bathurst-winning livery, the car was placed up for sale last year and was shaken down recently at Winton by Mobil 1 HSV Racing pilot Scott Pye before being sent offshore to its new owner.

The London-based Californian is one of the busiest men in world motorsport, sitting on the Board of Cosworth Engineering and acting as Non Executive Chairman of Motorsport.com in addition to his role with McLaren.

He also is a partner in United Autosports, the uniquely Anglo-American team that has competed in a range of categories and events, including the Bathurst 12 Hour GT race.

Brown’s classic race car collection already has an Australian flavour given he owns Alan Jones’ 1980 World Championship-winning Williams FW07B (chassis 7) in which ‘AJ’ won that year’s French and British Grands Prix as well as the Spanish GP that was later deemed a non-points race due to the politics of the era.

The same car was also driven by Jones to win the 1980 Australian Grand Prix at Calder Park in Melbourne and tested by current Red Bull star Daniel Ricciardo at Paul Ricard in France last year.