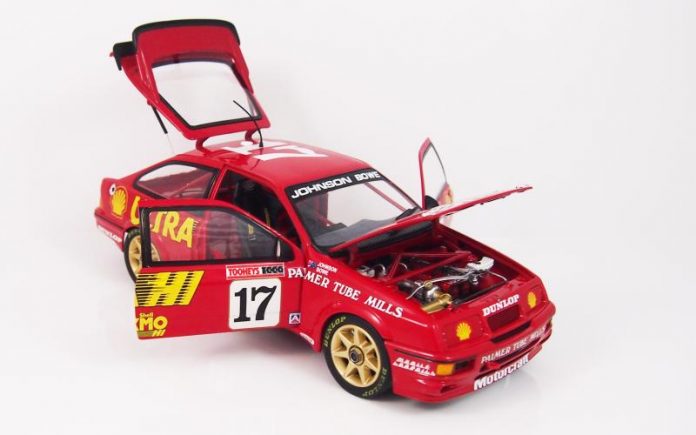 APEX Replicas has just announced a new model that Dick Johnson fans will be keen to know about – their limited edition 1:18 scale 1989 Bathurst-winning DJR Shell Sierra, which comes hot off the back of their release of the 1:43 scale version.

The famous #17 Shell Sierra led every lap of the 1989 Tooheys 1000 at Mount Panorama and took Dick Johnson to his second of three Bathurst wins and John Bowe to his first.

Johnson and Bowe, who are the last duo to lead all 161 laps of the October classic, drove the fast turbo hatchback to victory in dominant fashion, crushing the competition and finishing over a lap clear of their nearest challengers on the day.

Meanwhile the diecast Sierra will feature opening doors, bonnet and hatch and comes with a certificate of authenticity signed by both Johnson and Bowe.

These highly detailed models will be produced in limited numbers and are due for delivery in the third quarter of 2018.

APEX has already released the car in 1:43 scale, order it here.

We’ll bring you all the news across the course of 2018 as APEX Replicas release more models onto the market.

Speaking of the 1989 Johnson/Bowe Bathurst-winning Sierra, don’t forget you can order our special winners poster celebrating this victory via the V8 Sleuth Online Store here.