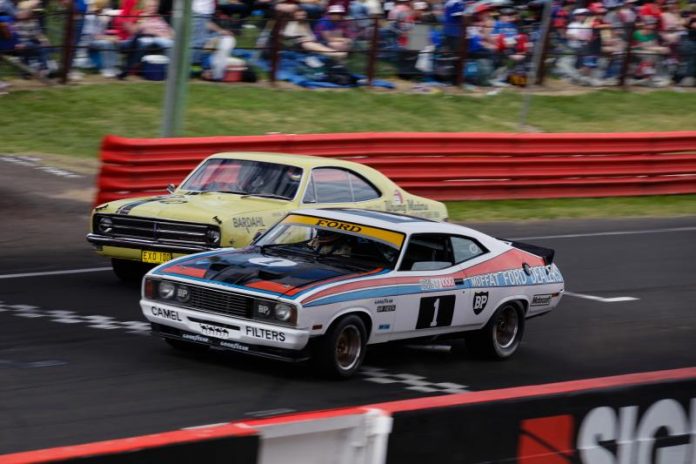 IT’S the car that led home the most famous 1-2 form finish in the history of Australian motorsport and it will be part of the Bicentennial Display at this year’s Supercheap Auto Bathurst 1000.

The #1 Moffat Ford Dealers Ford Falcon XC Hardtop driven to victory in the 1977 Bathurst 1000 by Allan Moffat and Belgian Jacky Ickx will come and join a display valued at well over $10 million over the course of next week at the Mountain.

The car led home the sister entry of Colin Bond/Alan Hamilton in a form finish that is still remembered by many far and wide around the country.

It was a result that crushed Holden on the most famous battleground of Australian racing and prompted ‘the General’ to bring Peter Brock back into the factory fold and reinforce its racing efforts to the point where it dominated the next period of racing in this country.

The Moffat/Ickx Falcon regularly lives day-to-day in the National Motor Racing Museum at Mount Panorama but will make a special trip ‘down the road’ to join the Bicentennial Display in Harris Park on the outside of Pit Straight.

The two-door V8 Falcon competed in four Bathurst 1000s in the hands of Moffat and various international co-drivers.

He and Aussie international Vern Schuppan drove it in 1976 and Moffat claimed pole position though the car fell victim to engine problems and retired.

The overall value of all machines in the display will be over $10 million, the perfect way to celebrate Bathurst’s Bicentennial this year.

It will be open on Thursday, Friday, Saturday and Sunday of race week at Mount Panorama and has been the result of joint efforts between V8 Sleuth, V8 Supercars and the Bathurst Regional Council.