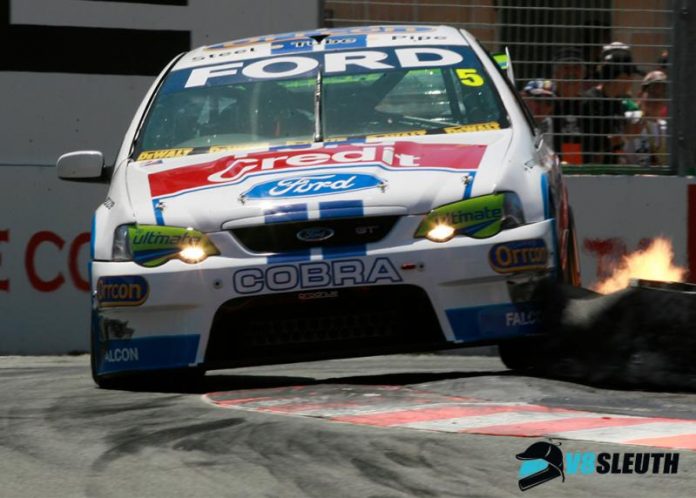 THE car that started the relationship between Mark Winterbottom and Ford Performance Racing (now Tickford Racing) has found a new home overseas.

Heck last campaigned the Falcon in 2016, sporting the Cobra livery that was last used by Winterbottom in the late stages of the 2007 V8 Supercars Championship.

You can trace the history of this, and every Falcon V8 Supercar, in ‘The Falcon Files’ magazine available here in our V8 Sleuth Online Store.

Knighton was able to acquire the fast Ford in December after talks to purchase an ex-Triple Eight Falcon fell through.

“The guy with the Triple Eight car never got back to me, so I thought it wasn’t meant to be and called Jason (Heck) the next day,” Knighton told V8 Sleuth.

“We did a deal and I flew to Melbourne to see the car a week later.”

The 39-year-old Kiwi began work on the car immediately with plans to run demonstration laps in the Falcon this weekend as part of the SKOPE Classic at Ruapuna Raceway in Christchurch.

“I already had a list of what I wanted to do with it,” said Knighton.

“It was in very good condition when we got it, but there was a few things about it I wanted to get absolutely right.

“So far I’ve completely re-done the front end, had the seat restored along with the wheels and side skirts.”

Perhaps one of the most recognisable features of the car was its striking Cobra livery that was used in the latter stages of 2007 to coincide with the release of the BF Cobra road car.

Knighton has gone all out to ensure that the livery is as accurate as possible, telling V8 Sleuth that it wasn’t quite spot-on when he received the car.

“We’ve had it fully sign written and I contacted Orrcon to ensure the stickers were as accurate as possible. I think we’ve got it bang on,” he said.

Work on the ex-Frosty mobile is almost complete, with just side skirts to be mounted up before the car heads to Ruapuna.

Despite the Falcon’s return to the racetrack this weekend, Knighton says he doesn’t have plans for the car to return to full competition.

“I’ll definitely take it out for club days and run it in a few classes for fun, I’d even like to bring it over to Bathurst for the Easter meeting one year but I don’t really want to do any close combat racing in it, I’ve got the Porsche for that.”

Click here for more details on the SKOPE Classic.