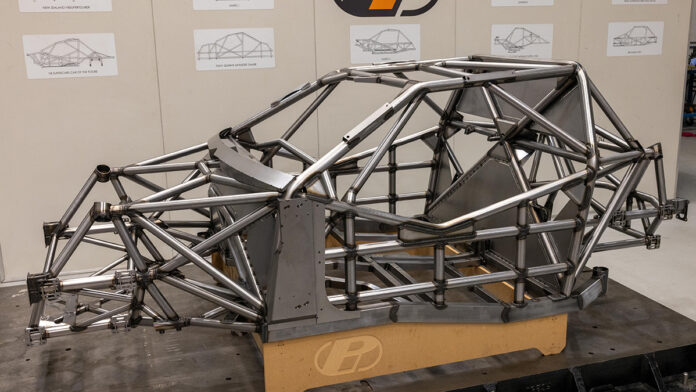 SUPERCARS has released photos of the chassis that will underpin the first Ford Mustang to be built to Supercars’ new Gen3 regulations.

Pace Innovations, who were responsible for the design, build, and assembly of the current Supercars’ Car of The Future prototypes and who supply COTF chassis to Dick Johnson Racing, unveiled the unpainted Gen3 chassis in its Yatala workshop on Wednesday.

It is the second Gen3-spec chassis to be revealed, following photos of the Triple Eight-built chassis that will underpin its first Chevrolet Camaro.

FOR SALE: Australian Grand Prix-winning car on the market

Supercars CEO Sean Seamer said the second prototype will soon be moved to the DJR workshop for further development.

“We’re very pleased that the second chassis is now completed and ready to begin the next phase of development with the Ford homologation team,” Seamer said.

“I’d like to thank the crew who have put in thousands of hours to reach this point, particularly the staff at PACE who have a history of international success.”

“We’re proud of the work that has gone into the design and styling of the Gen3 cars; they look fantastic,” Burgess said.

“We’re also very satisfied with the developments we have made in regard to safety and repairability, which was a key objective of the program.”

The reveal of the second chassis comes in the wake of last week’s crisis meeting between teams and the championship’s bosses following reports of dissatisfaction among some teams in the paddock over the viability of introducing Gen3 cars in time for the start of the 2022 Repco Supercars Championship.

A brief statement from Supercars at the time indicated that it was pushing forward with plans to introduce Gen3 in time for the start of the 2022 season, albeit with regular reviews in coming months.

The Gen3 platform will require a new control chassis with a lower roof height – among other changes – to cater to the Ford Mustang and Chevrolet Camaro body styles, which will underpin the next generation of Supercars racing in the wake of the demise of Holden and its Commodore.

New engines will also be introduced as part of Gen3 with the existing five-litre Ford and Holden overhead-valve V8 bespoke race engines replaced by ‘crate’ motors produced by Ford and Chevrolet – a version of the 5.4-litre Coyote V8 for the former and a derivative of the 6.2-litre LS3 for the latter.

V8 Sleuth’s Aaron Noonan and multiple Bathurst 1000 winner Greg Murphy discussed the looming introduction of Gen3 on last week’s edition of Repco Supercars Weekly, highlighting the different place the sport was in when it last introduced a new specification of car in 2013.

Listen to the episode in full below: