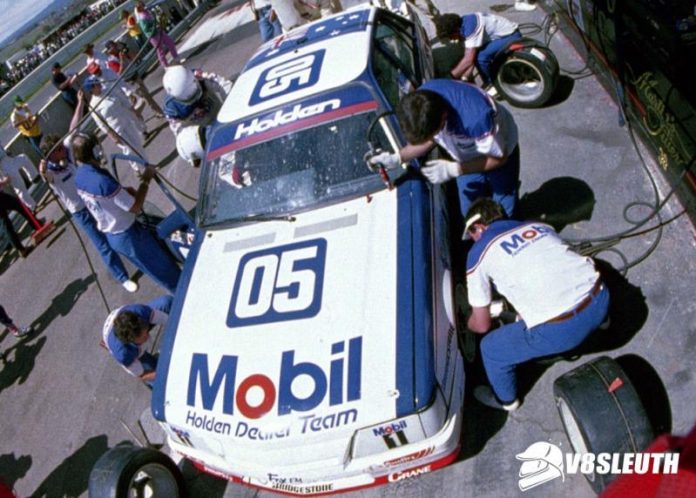 HOLDEN has been at the centre of countless memorable moments across its 50 years of factory support at Bathurst and in Australian motorsport in general.

Along with the key people and the majestic Mountain, the cars the factory has raced at Mount Panorama are a core component of these memories.

These are five cars that, for different reasons, have etched places in Holden factory racing folklore.

Yet there they were, smiling and shaking hands over a deal for the latter to race the former’s Commodore. It wasn’t Moffat’s first time driving for the HDT – he had a one-off race to give the 1980 Sandown 400 a publicity boost – but the 1986 deal saw him welcomed into the fold.

The union took the pair around the world, Brock recruiting Moffat to be his co-driver in the team’s assault on the European Touring Car Championship.

The Brock/Moffat combination claimed two race victories in the 1986 and 1987 Wellington 500 street races, but fell short in their one Bathurst 1000 together.

A practice crash forced a hurried rebuild, but the #05 Commodore remained in the thick of the fight until an aggressive arrival over speed humps in pit lane broke an oil cooler. The broken unit bypassed, the car ran reliably and quickly to fifth place.

THE PETTY BAR CAR – 1996 HOLDEN RACING TEAM COMMODORE VR
The Holden Racing Team’s arrival as a front-running organisation is summed up with the completion of this car.

The team called it ‘Gabrielle’; its rivals called it the ‘Petty Bar car’.

Two years earlier, HRT had adopted an engineering-based philosophy on car design, arming itself with a group of talented young staff and applying computer-aided design techniques.

Gabrielle’s distinctive feature was a large bar in the roll cage, running from behind the driver’s head down into the passenger’s side front footwell, similar to the ‘Petty Bar’ in a NASCAR’s roll cage.

The bar proved controversial – rulemakers banned it on all future cars, making Gabrielle the only Supercar to have the bar – and highly effective.

Craig Lowndes raced Gabrielle in the final rounds of the 1996 championship to clinch the title on debut, before he and Greg Murphy combined to complete his ‘triple crown’ by winning the Sandown 500 and Bathurst 1000.

The Holden Dealer Team arrived with two cars for its stars Colin Bond and Peter Brock, but the former aquaplaned into retirement in the early wet conditions.

That left Brock in a straight fight with Ford lead driver Allan Moffat, a battle that was resolved when the Torana driver pushed the Canadian into an unforced error across the top of the Mountain.

Brock raced away from the rest of the field to claim his first of nine Mount Panorama enduro wins, and the last non-V8 win for 14 years.

TOTAL DOMINATION – 1979 HOLDEN DEALER TEAM TORANA A9X
In the closing months of Harry Firth’s time as the boss of Holden’s factory operations, he and the HDT produced the ultimate version of the racing Torana in the form of the A9X package.

The car dominated its final two seasons as Holden’s circuit racing contender, romping to both championships and Bathurst 1000s in 1978 and 1979.

The ultimate example of the A9X is the HDT’s final Torana, the car Peter Brock and Jim Richards raced in the 1979 Bathurst 1000.

After claiming pole position in Saturday’s Top 10 Shootout, Brock used his pre-race parade lap in his Round Australia Trial-winning Commodore to scout the circuit conditions, using the knowledge to build a demoralising lead on the opening lap.

With their chief contenders falling by the wayside, Brock and Richards amassed a six-lap lead by the chequered flag – a record winning margin that stands to this day – as A9X Toranas filled the first eight places, while Brock proved the #05 Torana’s health by setting a new lap record on the final lap.

BILLION DOLLAR BABY – 2009 HOLDEN RACING TEAM COMMODORE VE
The VE Commodore was a winner straight off the bat on the racetrack.

Holden Racing Team driver Todd Kelly claimed victory in the model’s championship debut at the 2007 Adelaide 500, while Garth Tander raced his VE to that year’s title.

However, success at Mount Panorama took a little longer; Tander and Will Davison raced to victory in the 2009 Bathurst 1000, leading a VE Commodore sweep of the top four places.

Along with the accolade of being a Bathurst 1000-winning car, the chassis that claimed the breakthrough Bathurst triumph in ’09 holds another special place in factory Holden history.

The car made its race debut in the hands of Mark Skaife in the final round of the 2007 season, the Holden legend using it for his final full-time season in 2008.