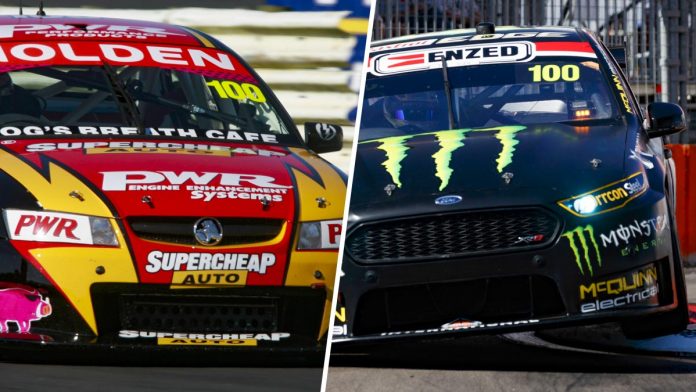 CHANGING your car number has become a popular way to celebrate a Supercars driver, sponsor or team’s milestones in recent years.

Anton De Pasquale will run the #100 at the opening round of this year’s championship – the Repco Mount Panorama 500 – in honour of Dick Johnson racing sponsor Pirtek opening a new store in Albany, WA, which will be their 100th location in Australia.

De Pasquale will become the fifth driver to mark a century milestone by briefly adopting the #100 for a Supercars Championship round.

Jason Bargwanna celebrated his 100th championship round at Symmons Plains in 2005 by adopting the number on his Larkham Motor Sport Falcon.

Unfortunately it was a round to forget for Bargs – not least because he suffered with Chicken Pox the entire weekend.

He rose from 27th on the grid to 19th in the Saturday race, but was spun to the back of the field and collected by John Bowe on the first lap of the opening Sunday race.

“That is the toughest weekend I have ever spent in a race car,” Bargwanna said.

“For such a special round there was very little to celebrate. It is hard to describe how uncomfortable it was in the car. I cannot wait to get home.”

Cameron McConville enjoyed a better time of things when he celebrated his 100th Supercars round start a couple of years later.

McConville’s Supercheap Auto-backed Holden adopted the #100 for the Pukekohe round of the championship, where he battled in the midfield armed with the older VZ Commodore against the then-new VEs.

Cameron Waters didn’t have any results worth celebrating after using #100 to mark his 100th championship race start on the Saturday at the Newcastle 500 in 2018.

A third-fastest time in Friday practice augured well but Waters was only able to manage 16th in qualifying, compounded by an additional three grid spot penalty for impeding Michael Caruso during the session.

He pitted at the end of the opening lap to get into clear air, a strategy that paid dividends over the course of the race.

The #100 Monster Energy Ford took the chequered flag in ninth, but Waters was subsequently stung by a 15-second penalty for a clash with Will Davison 15 laps from the finish.

“We were trucking on for a good position, seventh or an eighth or something if we didn’t have the issue with Will,” Waters said after the race.

“He had to pit again and he blocked me for four laps so I just had a crack and tried to pass him and it stuffed us both over. I don’t know what he was thinking, but it is what it is.”

Clearly there were no hard feelings: Davison and Waters paired up to finish second in last year’s Bathurst 1000.

The most recent instance of the #100 appearing in a Supercars race came in Townsville in 2019.

Rick Kelly adopted the digits as the round coincided with the 100th anniversary of Castrol launching in Australia and New Zealand.

Kelly actually enjoyed the best weekend of any driver on our list: he drove his renumbered and reliveried Nissan Altima to 17th in the Saturday race, then came home sixth in the rain-hit Sunday race.