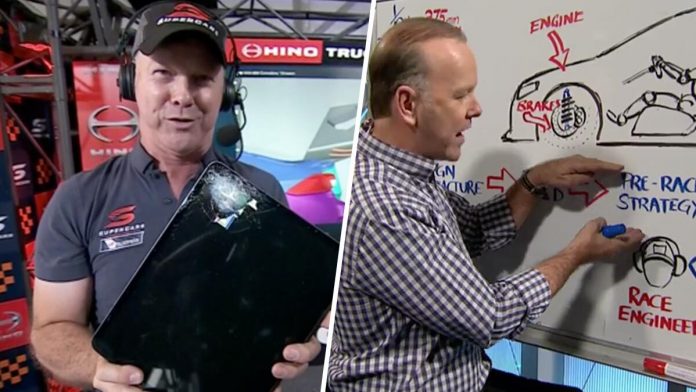 MARK Larkham’s axing from the Supercars TV team will leave a big hole in the broadcasts in 2021.

For over a decade, former driver and team owner turned TV star ‘Larko’ has entertained and informed viewers in a way only he can.

Breaking down complex topics on his whiteboard, or more recently via the ‘Hino Hub’, has been his greatest broadcasting strength. Fun and informative have been the pillars to his craft.

Sometimes, those explanations went off without a hitch. And others, well… how he handled the occasional faux pas on air was perhaps what we have all enjoyed the most.

A desire to reduce the amount of ‘technical’ content in the broadcasts, fearing it alienates casual viewers, is believed to be behind the decision to leave Larko out of the 2021 line-up.

Like you, we at V8 Sleuth love Larko, so we’re celebrating his contribution to Supercars TV with a list of our top five moments…

If there’s a word that sums up Larko better than ‘knowledgeable’, it’s ‘passionate’. And there is nothing that gets Larko’s blood pumping like Mount Panorama.

Arguably the highlight of his driving career was his 1999 Bathurst pole lap, which appears on the DVD Supercars Bathurst Shootouts Highlights 1997-2006, available now in the V8 Sleuth Bookshop.

This near 10-minute monologue that opened Network Ten’s Bathurst coverage in 2016, which includes a corner-by-corner track guide, was simply stunning.

Breaking down the big one

While setting the scene is one thing, breaking down the action – both during and after races – is another.

After that same Bathurst 2016 event, Larko was at it again, producing this brilliant analysis of the controversial incident between Jamie Whincup, Scott McLaughlin and Garth Tander for RPM.

What no one saw was how much preparation Larko would put into all these segments, presented either on his famous whiteboard, or via the latest touch-screen graphics.

Ok, let’s get to what you clicked on this story to see – stuff going wrong!

Of the various gaffes over the years, there were few better than Larko’s reaction to a brake rotor falling onto his foot during the post-race coverage of the 2018 Sandown 500.

It was a moment Russell Coight himself would have been proud of.

As a viewer in these moments, it was hard to know whether to laugh or cry…

And our final nomination…

It’s not so much one moment, but a nod to every time that Larko’s enthusiasm to explain direct from pit lane resulted in him getting in the way… and in trouble!

Some were caught on the broadcast, most famously including a stern ‘go away’ from former Larkham employee Mark Dutton when touching a stack of Triple Eight’s tyres during the 2014 Bathurst race.

There were close calls with cars and mechanics too… and goodness knows what moments the broadcast didn’t capture!

But all jokes aside, for making Supercars broadcasts fan-friendly and fun for so many years, we all owe Larko a sincere thanks.

We look forward to seeing what he gets up to next…