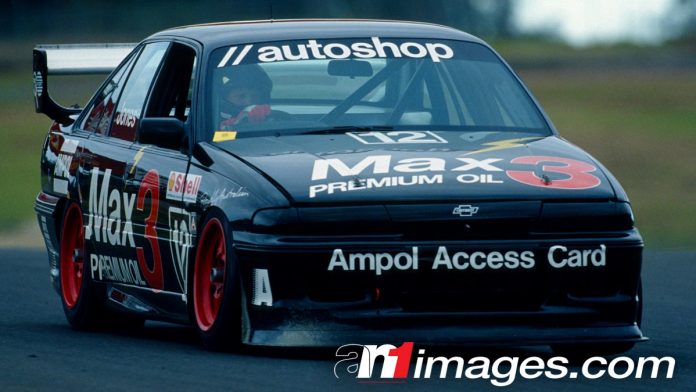 WITH Ampol returning to racing on the Red Bull Holden Racing Team Commodores this weekend at Hidden Valley, we thought we’d look back at the petrol brand’s last stint on the Supercars grid.

The company sponsored Bob Jones’ Commodore entry for several seasons in the mid-1990s, and the Melbourne-based privateer is pleased to see Ampol back in Australian motorsport.

“The re-introduction of Ampol is quite nostalgic for me and I will be very proud when I see the logo on the cars in Darwin this weekend,” he said.

“It has a rich history in car racing and is a brand that’s always been about high-quality products for all Australians.”

Jones and his Car-Trek Racing team had been a regular in Australian touring car racing since the start of the 1990s, and landed Ampol sponsorship in time for the 1992 endurance races.

Their relationship got off on the right foot: Jones and ‘Captain’ Peter Janson finished in a remarkable fourth place!

Bathurst was less successful, however, with the #13 Holden one of the victims of the torrential downpour that prematurely ended the race. ‘The Captain’s 19th and final ‘Great Race’ ended in the barriers at Reid Park, but he and Jones were still classified as finishers in 20th place.

The Ampol-backed VL is one of many Holdens pictured in our upcoming release, Racing the Lion: An Illustrated History of Holden in Australian Motorsport, a 400-page hardcover book paying tribute to the marque’s rich competition history spanning over seven decades.

Don’t miss out and pre-order it now HERE!

The 1993 season marked the start of the five-litre V8 era and Jones was aboard one of nine VP Commodores in the opening Australian Touring Car Championship round at Amaroo Park, although his black Ampol example was one of just five brand-new Holdens built for the new rules.

The high point of the year came, once again, at the Sandown 500. In a race of attrition, Jones and Greg Crick stood on the podium in an incredible second place!

The Ampol backing continued into the 1994 season with Jones contesting the full suite of five litre touring car races that year, including the ATCC, Sandown 500 and Bathurst 1000, as well as the category’s first races on the Surfers Paradise streets supporting of Gold Coast Indy.

Jones rounded out the year with a 10th place finish in the Sunday morning race at the Formula 1 Australian Grand Prix in Adelaide.

However, the event marked the last time the Ampol brand appeared in Australian touring car racing as the company’s merger 1995 with Caltex Australia saw the brand retired until its resurrection this year.