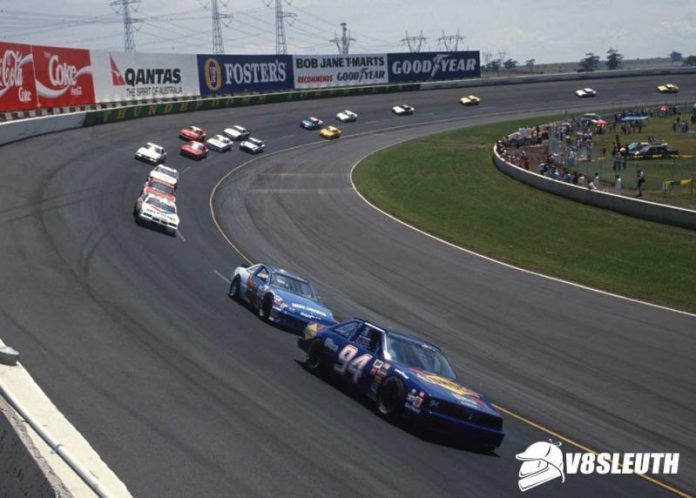 The NASCAR Christmas 500 took place on December 18, 1988, the second major race to be held on the oval circuit after February’s star-studded Goodyear NASCAR 500.

The tyre magnate didn’t mess around in developing a promotional hook for the December race: Jane put up a million-dollar prize purse distributed across the 32-car field, with $80,000 up for grabs for the winner along with substantial bonuses for leading at quarter-distance, half-way and three-quarter distance during the 280-lap affair.

Once again the event drew a substantial contingent of American NASCAR stars down under, with Morgan Shepherd holding off a race-long challenge from Sterling Marlin to take the victory.

Allan Grice was the best finisher among the local heroes in eighth place, while recently-crowned 1988 Australian Touring Car Champion Dick Johnson was next best in 14th in what would prove his final NASCAR race on Australian soil.

The race was also scheduled to be Peter Brock’s debut NASCAR race, but engine problems in private practice and qualifying saw his #05 Ford Thunderbird withdrawn without setting a time.

Future Bathurst 1000 winner and Holden Racing Team chief Win Percy was also down to race an Oldsmobile as a teammate to Grice, but engine problems meant the Englishman joined the Channel Seven commentary team on race day.