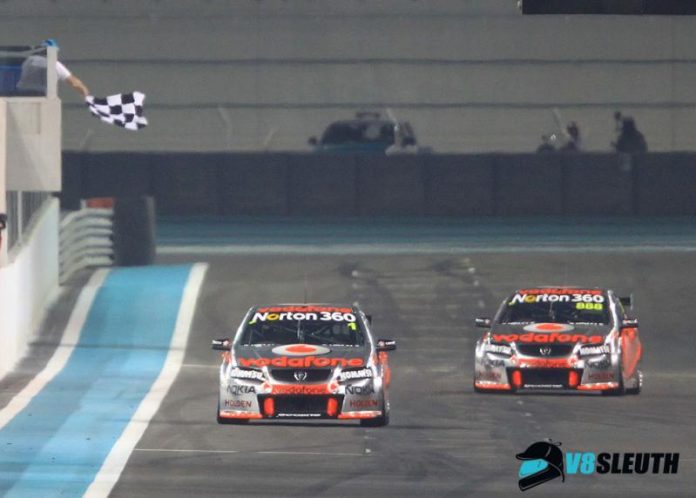 FEBRUARY 19, 2019 marks nine years since Triple Eight completed its switch to Holden, celebrating its first race with Holden Commodores with not just a victory, but a 1-2 finish.

The 2010 V8 Supercars Championship kicked off overseas, the YAS V8 400 in Abu Dhabi the first of two flyaway events in the Middle East to start the season.

The event marked the end of an 18-month saga that began in mid-2008, when Ford pared back its factory support to just two Supercars teams – neither of which was Triple Eight, which had just led the design and development of the new FG Falcon racecar.

“They waited until that was done and delivered before they told us – two weeks later – they were not renewing our contract for 2009,” Dane later said in a book on the team’s decade in Supercars.

“I think they owed us more than that and that’s why I was annoyed at the time.”

That annoyance led to Triple Eight’s Falcons racing throughout 2009 with no Ford badging, and with a deal to cross the floor.

Holden had wasted no time opening talks with the Brisbane-based squad once the Ford news was out, and a deal for the 2010 season was confirmed on the eve of the 2008 Sandown 500.

In between Jamie Whincup claimed both the 2008 and 2009 Supercars Driver’s Championships, but he would pursue a third aboard a brand-new Holden Commodore VE, the team having a busy off-season building up new cars for he and Craig Lowndes.

Any doubts that the Holden switch would put the team on the back foot were wiped away in Abu Dhabi.

Whincup took pole position for the inaugural race at Yas Marina and, despite being jumped on the start by Mark Winterbottom, he soon regained the lead and won as he pleased.

Ramming the point home was Lowndes’ second placing, who used an alternate pit strategy to follow his teammate across the line after starting from 10th on the grid.

“It is an amazing result,” Whincup said. “To debut a new car on a new circuit, qualify on pole and get a one-two will be a day both the team and I will remember for a long time.

“There was a huge question mark over the cars heading into this event but we have come out strong and you can’t ask for anymore.

“That is as good as it gets today.”

In the nine seasons since, Triple Eight has racked up a total of 133 championship race wins including four Bathurst 1000 victories.

It has also claimed six drivers’ championships, and eight out of the nine team’s championships between 2010 and 2018 aboard Holden machinery.

In 2017 Triple Eight became the sole factory-backed Holden team in the Supercars Championship.