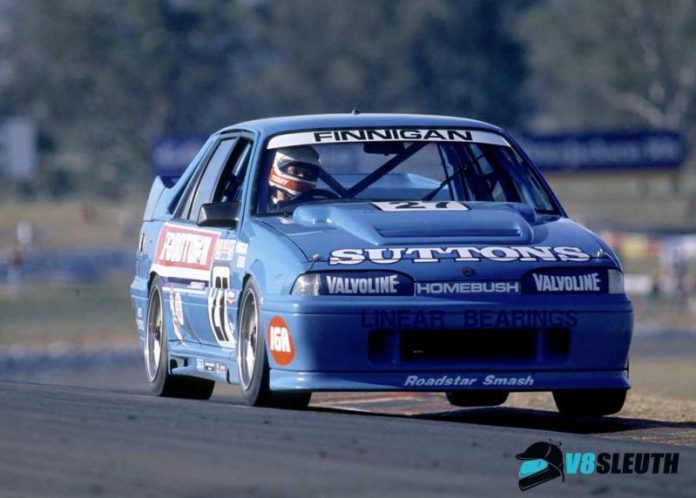 A FORGOTTEN former Bathurst ‘Walkinshaw’ fuel-injected Group A Commodore VL has just come onto the market – and its owner has entrusted V8 Sleuth to handle its sale.

Built and raced by Sydney privateer Terry Finnigan between 1989 and 1991, this former Foodtown Supermarkets-sponsored Holden had disappeared for many years after Finnigan moved to a brand new VN model Commodore in mid-’91.

Now the owner of this interesting piece of muscle car history has decided to put this car on the market with V8 Sleuth selected to handle its sale.

View the advertisement here in our Classifieds Page Powered By Tickford.

The car also competed in six rounds of the Australian Touring Car Championship in 1990 and 1991, endurance races at Oran Park (1989) and Eastern Creek (1990) and two AMSCAR Series rounds at Amaroo Park in 1990.

The all-important CAMS Log Book – documenting the car’s racing history – is also included with the sale of the vehicle, which would be a fantastic restoration project for an owner looking to compete in the future in Historic Group A competition once a Certificate of Description is approved through CAMS.

“There’s a huge interest in cars of this particular era and Historic Group A racing cars in general,” says V8 Sleuth’s Aaron Noonan.

“Terry Finnigan was one of the very successful privateer drivers of the 80s and 90s who prepared his own race cars and delivered many great results, particularly in The Great Race at Bathurst.

“This particular VL was stripped of its running gear for his new VN in 1991 and has since been in the hands of only two owners.

“Its current owner has been heading down the path of using the car for road registered purposes, however has decided to sell it – he’d love to see it returned to its original Group A glory and taken back onto the track.”

The car was repainted in its base blue colour and is drivable and has a Holden 308 engine under the bonnet.

It would form the ideal restoration project to allow a passionate owner/driver to put another Australian-built V8 Commodore onto the Historic Group A grid that competes on a variety of tracks around the country each year.

V8 Sleuth has other cars coming to market soon – if you have an interesting car you’d like us to handle the sale of, contact us via email here or call 03 9585 1981.