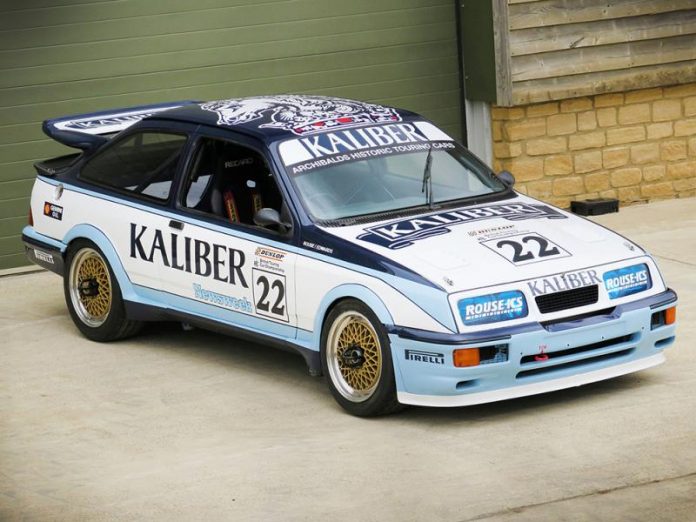 A FORD Sierra RS500 Cosworth that made one single Australian race start in the final Bathurst 1000 run to Group A rules in 1992 has popped back up again.

To be auctioned in England as part of the Silverstone Classic Competition Car Auction on Thursday July 18 at the Silverstone Circuit, the car was raced at Bathurst in ’92 by Ken Mathews, Rod Jones and Englishman Mike Newton.

Originally built by Andy Rouse Engineering and raced predominately by Guy Edwards in the 1988 British Touring Car Championship in Kaliber colours, the turbo Ford was in fact the sister car to Rouse’s machine from that season that ended up being sent to Australia for Peter Brock to race in 1989.

The car up for auction – ARE KAL 0988 – was sold to Adrian Fu after the ’88 BTCC season and he raced it at Macau and various touring car events in Asia.

It competed at Bathurst in ’92 though was not classified as a finisher with insufficient laps completed (101) and was placed into the Bathurst Museum prior to being purchased in 1993 by the now vendor and raced in New Zealand’s Endurance Championship.

According to Silverstone Auctions: “Wins at Timaru International Motor Speedway and Teretonga helped him to win the Championship with co-driver Murray Cleland in 1996.

“After 1997, the Sierra was retired and remained uniquely within the ownership of our vendor until being shipped to the UK last month. In 2016/17 it was decided that the Sierra should be totally rebuilt and returned to its original livery with the possibility of running in the Archibald’s Historic car series in NZ, which it later did most successfully.

“In period, the car was continuously developed and evolved with input from Australia’s favourite son Peter Brock and all this hard-won know-how has been incorporated into the rebuild.

“The specification does include the original Zytec system which has benefitted from various upgrades primarily enlarging the fuel delivery capacity.

“The engine is a new, long-stud, 205 block with only fifteen hours of running designed to run with 2.1 bar boost producing 540 bhp with much of the engineering carried by renowned tuner Ivan Tighe of Brisbane with particular attention being paid to cam profiling and reliability.

“Much of the suspension work was engineered by respected specialists Harrop Engineering of Brunswick in Victoria applying new manufacturing processes to the Peter Brock suspension.

“The Brock driveshafts which, in the day were recognised as twisting less than anyone other preparers were reverse engineered.

“Both driveshafts are new and the complete rear end has new bearings and a basic spares package is available together with the prospect of a very complete inventory to support a race effort over many seasons.”