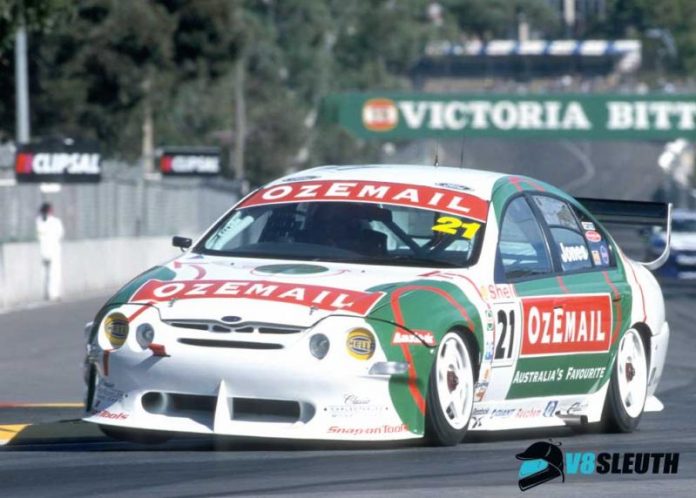 FORD’s AU Falcon V8 Supercar wasn’t necessarily a huge hit back in the period with its results on the scoreboard, however race cars of the era are now keenly being acquired by collectors with a view to future Historic competition – and V8 Sleuth has just listed one on the market.

The Ozemail Falcon AU that brought Brad Jones Racing into the V8 Supercar Championship back in 2000 has just been added to the V8 Sleuth Classifieds page and the organisation is handling its sale on behalf of the owner.

The car’s history is covered in our new publication ‘The Falcon Files’ among over 150 other V8 Supercar Ford Falcon race cars – order it now here from our Online Store.

It was returned to its Ozemail livery for static display and has been in the hands of its current owner for the last seven years who has now elected to move it on via V8 Sleuth’s car sales departments.

It needs some work and components to return it to full running order, but is the perfect car if you’re looking to live your dreams and own a V8 Supercar track car that one day would also make a smart Historic motorsport investment.

Also eligible for the Kumho Tyre V8 Touring Car Series, the ex-Jones AU Falcon is available to be inspected with the full advertisement here on the V8 Sleuth website.

And yes, this is the same car Brad Jones was driving at the 2000 Clipsal 500 when this happened …