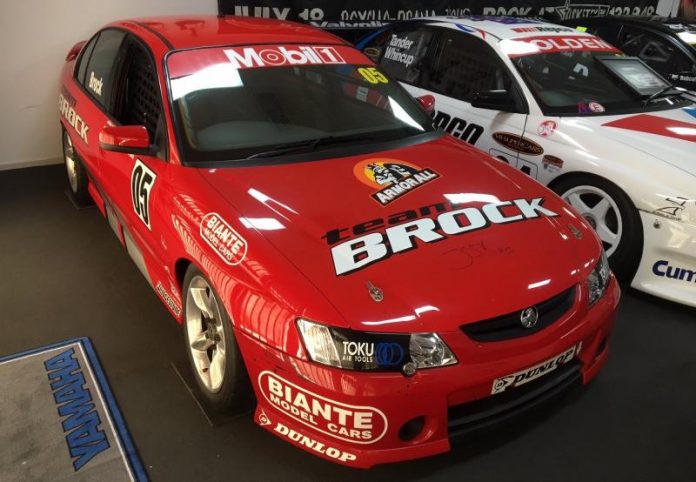 RECENTLY here on the V8 Sleuth website we put out a call to find where all of the Future Tourers of the early 2000s have ended up and we were blown away by the response from the industry!

Within days we have had contact from six or seven car owners with leads on more, so we’ll bring you further details on these in upcoming weeks.

But along the way we’ve also managed to turn up what happened to a forgotten Team Brock Commodore, the Future Tourer-spec car raced by James Brock during the period when the V8 category competed as part of the 2000/01 BOC Gases Australian Super Touring Championship.

Built by Brock under the Diamond Valley Speed Shop banner after he had claimed victory in the inaugural category race (then known as Bathurst Tourers) at Mount Panorama in 1999 aboard a VS model, this VT Commodore made its racing debut at Oran Park in July 2000 and competed in Brock Jnr’s hands with the backing of V8 Sleuth partner Biante Model Cars.

The car also saw a certain ‘P. Brock’ step behind the wheel for practice laps, including during Friday practice at the Mallala round of the series in November 2000.

When the BOC Gases Series under TOCA Australia stopped after the summer 2000/01 season, this car ended up competing in a handful of Future Tourer races at Power Tour/Super Truck events and was later used as a driver training car under the Team Brock banner, updated to VY specification.

It now lives in Perth in the private racing car collection of enthusiast Andy Brown – so hopefully this starts the ball rolling on where all of these cars have ended up.

Do you own a Future Tourer or know where one is?

Get in touch with us here with any details you can provide.