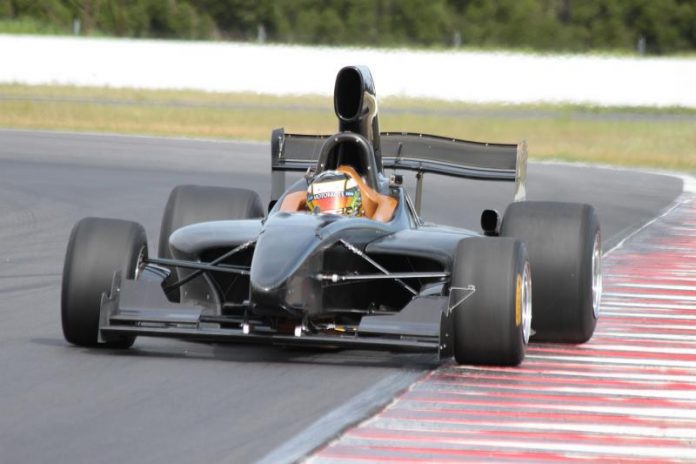 Nearly 12 months of design and car build work, based at Borland Racing in Melbourne, reached a milestone this week, with the car turning a wheel for the first time at the northern Victorian track

Formula 3 champion Tim Macrow took the wheel of the five-litre V8-powered car for the day, initially working through a program of technical systems checks, before winding up the pace through the afternoon.

“It couldn’t have been a more productive day for day one with a brand new race car,” said Chris Lambden, who has overseen the development of the FT5000 concept to date.

“The systems checks – primarily ensuring the engine, gearbox, and MoTeC system were speaking to each other correctly – were done by lunchtime, and Tim was able to push things along later in the day, even though we were running the car in relatively conservative spec.

“All our technical partners had someone on hand for the day and, I’d have to say, everything went like clockwork, which is a great credit to all of them. After all the work that has gone in, it was pretty exciting to see and hear the car on track.

“We’re looking forward to running the car publicly for the first time at the Muscle Car Masters and illustrating the sight, sound and smell of the FT5000 concept. Sydney Motorsport Park is a venue that should allow the car to stretch its legs a bit.”

The FT5000 prototype is the result of a desire to create a cost-controlled ‘Big Banger’ crowd-pleasing, modern open wheeler race car, at the same time providing an exciting challenge for top racing drivers, from Formula Ford/Four graduates to more experienced racers.

Based on a chassis design by American company Swift Engineering modified to suit, it utilises a 5-litre V8-engined, big tyre, modest downforce philosophy that, even prior to the car’s completion, has created a lot of interest.