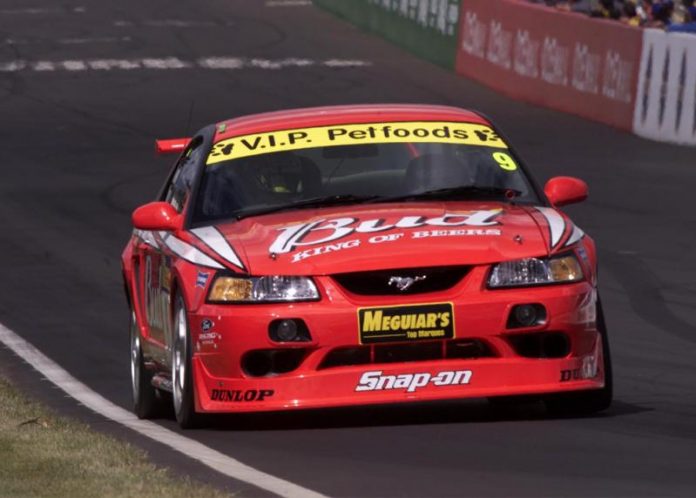 Mustang driven by John Bowe is up for sale, complete with its sister car …

HERE at V8 Sleuth we were thrilled to receive a huge response to our hunt for the Bud Mustang from the GT Performance category of the early 2000s.

The messages came almost instantly and we were put in touch with the current owner of the infamous Mustang and not only is the car still running, it lives with its sister car and the pair are up for sale!

As we thought, the first car built by the Prancing Horse Racing team went on to compete in the majority of the 2001 GT-P season before a second car ran alongside its sibling for the first time at Bathurst in 2001 though only one of them made the grid for the GT-P Showroom Showdown.

Bowe climbed aboard the second car for the IndyCar meeting at Surfers Paradise before both cars raced together in Nations Cup Group Two spec at the 2002 Australian Grand Prix at Albert Park.

The second car went on to make spasmodic appearances in the Nations Cup field before the PROCAR-run series folded at the end of 2004.

Current owner of the ex-PHR cars, Neil Byers, has held onto the unique beasts since acquiring them just over 10 years ago and is now selling them both, complete with a huge range of spares.

Byers used the second car to compete in the now defunct V8 Giants category as part of the Australian Motor Racing Series between 2005 and 2008.

“Geoff Munday’s brother had the cars and I bought them from him as a package for the V8 Giants AMRS category,” Byers told V8 Sleuth.

Both cars come with their original logbooks and a host of spare parts including engine components, a spare gearbox, shock absorbers and range of cosmetic and mechanical spares.

Click here to view the advertisement for their sale in our V8 Sleuth Classifieds page Powered By Authentic Collectables.