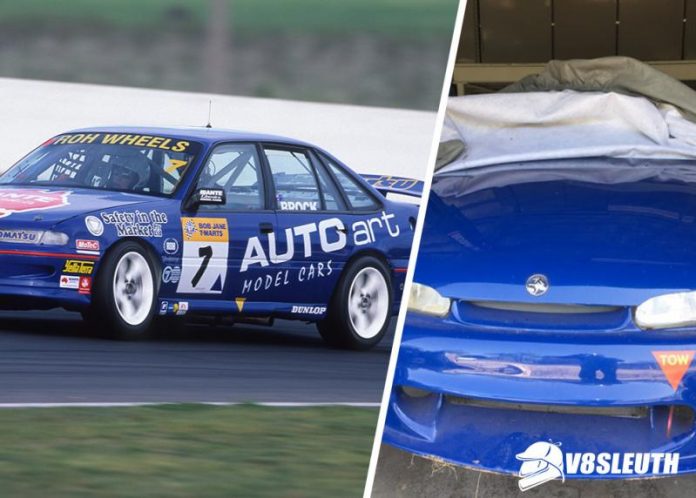 IT didn’t take long for our call for help in tracking down James Brock’s Bathurst-winning Future Tourer to result in the car being uncovered!

Thank you to everyone who left comments and sent us messages via social media – including the car’s current custodian Mal Rose.

The former Supercars privateer took ownership of the blue Commodore in 2010, and confirmed our suspicions on the car’s lineage prior to its notable victory at Mount Panorama.

“It was originally Peter Fitzgerald’s Goodyear AUSCAR in ’90-91, the one he backed into the wall on the bowl at Adelaide International,” Rose told V8 Sleuth. “It was a VN-shaped bodyshell and was updated to VR-VS.”

With the announcement of the Junior Tourers category – later renamed Bathurst Tourers, then Future Tourers – in 1999, the car was rebuilt into the car Brock piloted to a famous win in the category’s inaugural 300km race at Mount Panorama that October.

It would be Brock’s only race in the car which was then sold to John Meyer, a long-time friend of Rose’s, who won a pair of CAMS NSW Supersprint championships aboard the car in 2001 and 2003.

However, the car was nearly destroyed at the end of the decade.

“And lo and behold, the thing caught fire!”

Luckily Rose, whose V8 Hot Laps business was based at the circuit, had enough extinguishers on hand to put the flames out before the car was badly damaged.

He later did a deal with Meyer to take ownership of the car, and restored the exterior of the car to pristine condition.

“The paint job’s immaculate,” Rose said. “I spent a good three years doing a full rotisserie paint job inside, underneath and outside.

“It’s exactly the same colour as when James raced it, although it hasn’t got all the stickers on it.

“Inside the car it had all the Biante Model Cars and Champion Mining stickers on the dash and the roof, but it lost all the interior stuff in the fire.

“It had a full dash panel of all the original gauges, but it all got melted so I ended up putting a MoTec dash in it. James’ original seat got melted so it was replaced too.

The photos of the car above show it also sitting on a set of Group A-era Perkins Engineering wheels, while the engine also received a slight upgrade over the car’s life – it now has a full late-’90s V8 Supercars motor under the bonnet!

“The engine, Meyer kept over-revving it on down changes; kept blowing up and rebuilding it until we decided to put a Chev in it,” Rose said.

“The car now has my original Bathurst Privateer Cup-winning engine in it, an early RED Rob Benson-built Chev good for 580-600 horsepower, and a few years ago I bought a second-hand sequential Holinger gearbox from Garry Rogers.

“It’s been on my hoist with a car cover on it in my workshop for years, I haven’t washed it for years.

“We haven’t used it since I restored it, so the last time it was driven was probably in 2013.”

Keep checking the V8 Sleuth website in future for more stories as we trace unique cars from Australian motorsport history.