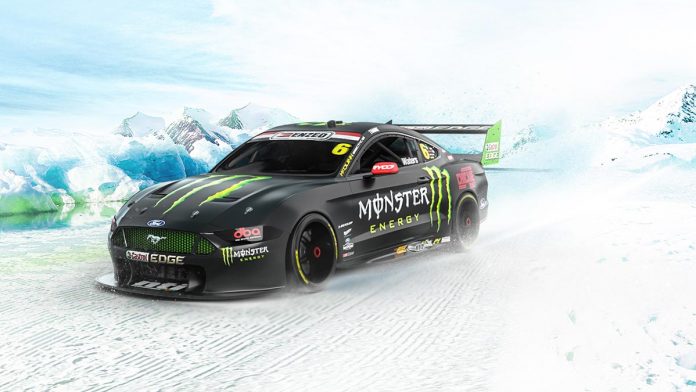 TICKFORD Racing has revealed the look Cameron Waters’s #6 Ford Mustang will carry in the 2021 Supercars season.

The Mildura-born racer will pilot a brand new chassis into the final year of the Car of the Future rules, one that will carry a new iteration of Monster Energy’s trademark matte black and bright green hues.

The 26-year-old has had the energy drink giant’s backing since graduating to the main game in 2016, but Waters enters his sixth season in Monster colours as a genuine championship contender off the back of a breakthrough 2020.

His maiden solo championship race win at The Bend highlighted a year where he claimed pole position for the Bathurst 1000 and posted a career-high nine podium finishes on his way to second place in the standings, feats that earnt him the prestigious Supercars Drivers’ Driver Award.

“It’s awesome to have the support of Monster Energy for a sixth season,” Waters said.

“They’ve been massive supporters of my career, as have Enzed, Castrol, McQuinn Electrical, and others, so it’s great to have their continued support and also have a number of new partners join the team.

“It’s the toughest looking car on the grid, and by the end of last year it was one of the fastest, so we’re definitely looking to pick up where we left off in 2020.

“We shook down the new chassis just before Christmas and it ran perfectly, so hopefully that’s a sign of things to come and we can build on the momentum we finished last season with.”