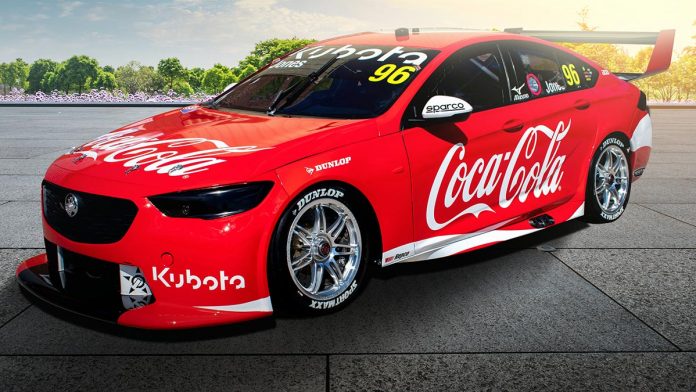 BRAD Jones Racing has secured Coca-Cola as the primary backer of Macauley Jones’ entry for the 2021 Repco Supercars Championship.

Jones’ third season racing in the ‘main game’ full time will be under the BJR banner following Tim Blanchard’s move to set up his own squad for 2021.

The result is a new number – #96 – a new colour for his Holden and a new co-driver in the form of Chris Pither.

This is a new era for myself with a new number also so I’m really looking forward to the year,” Jones said.

“I’ve had a fair few changes in my world in preparation for the season, moving under the BJR banner, a new sponsor, a new number and an engineering change with Tom Wettenhall my new engineer.

“It’s an exciting time for myself and BJR moving forward and I’m looking forward to what we can accomplish as a team.

“Having more involvement with the team’s day to day business has also been great to get my head around how it’s all coming together.”

Pither returns to co-driving duties after racing full-time with Team SYDNEY in 2020, the move reuniting him with the squad for whom he raced in the Super2 Series in 2014, when he was Jones’ teammate.

“I was aiming to drive full time this season, but the right opportunity wasn’t available,” Pither said.

“Regardless, I’m grateful and excited to race the Bathurst 1000 with Macauley.

“It’s great for myself and Coca-Cola to find a home at Brad Jones Racing. I have enjoyed racing for the team in the past so it’s good to be back on familiar grounds.”

Jones will hit the track in his new colours for the first time on Friday for the Victorian teams’ official pre-season test day at Winton.