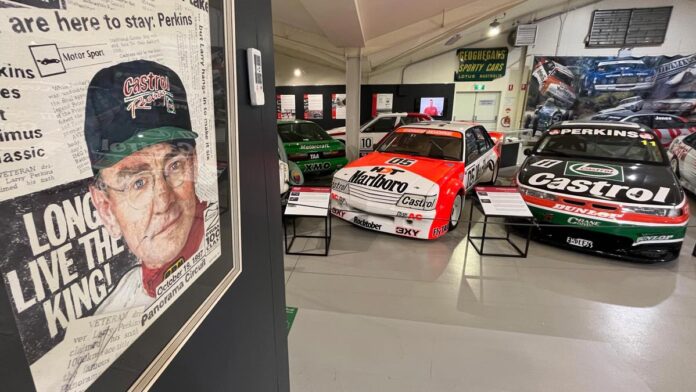 FROM Bathurst-winning Commodores to a VW Beetle, the National Motor Racing Museum has assembled an impressive line-up of cars to celebrate the career of Larry Perkins.

The exhibit titled ‘Engineered Outcomes – The Larry Perkins Story’ opened in time for race week at the recent Repco Bathurst 1000 and will run through until Easter in 2022.

For those yet to visit the venue, located on the outside of Murray’s Corner at the Mount Panorama Circuit, V8 Sleuth takes you inside via this special gallery.

This car is presented as Perkins’ last Bathurst car from 2003, but was also son Jack’s first in 2006 when racing in Jack Daniel’s colours.

An extensive array of memorabilia is also part of the display, including items from Perkins’ own collection.

The 1984 Holden Dealer Team ‘Big Banger’ that Perkins and Peter Brock drove to victory at Bathurst is a regular museum exhibit and sits proudly among the other LP machinery.

Another PE-supplied car, this Volkswagen Beetle was driven by Perkins in both the 1979 Repco Reliability Trial and the inaugural Australasian Safari in 1985.

Next to it is a Dick Johnson Ford Mustang that Perkins drove as car #18 in Hardies Heroes at the 1985 Bathurst 1000.

Larry’s diverse 1988 is shown in this picture.

Alongside the VL Commodore he co-drove in that year’s Great Race with Denny Hulme sits the race suit he wore during his Le Mans 24 Hours campaign with Jaguar.