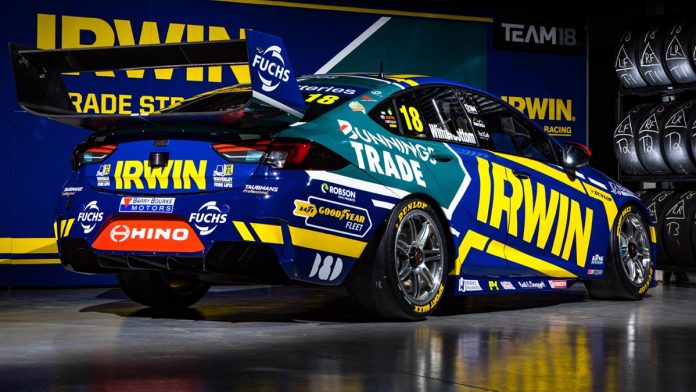 Team 18 has revealed a fresh look for Mark Winterbottom’s IRWIN Commodore ahead of the 2021 Repco Supercars Championship.

The #18 Holden will sport the iconic green of retail giant Bunnings Warehouse on its rear quarter panels, alongside the traditional blue and yellow of IRWIN.

Bunnings is the exclusive retailer of IRWIN Tools in Australia. The brand featured on the car last year but has taken a bigger presence for 2021.

The 2015 Supercars Champion has not scored a race win since November 2016, some 119 races ago, while driving for his former home Tickford Racing.

“We announce every year how hungry we are to win, but with the progression of this team I’m heading into this new season feeling revamped and more determined than ever to get back to the top,” said Winterbottom.

“We’re in a great position, we’ve got great staff, great equipment and we’re as hungry as ever. It’s time for Team 18 to get up the front and chase those wins.”

Winterbottom will have to wait a little longer than hoped to get back behind the wheel of his Triple Eight-built Holden due to the recent postponement of the Winton pre-season test.

The year’s first proper hitout for the Victorian-based teams was meant to take place on Tuesday February 16 but has been postponed due to a state-wide lockdown.

It is now scheduled for February 19 but remains very much dependent on how the lockdown unfolds.

Supercars is currently scheduled to open its season on February 26-28 with the new Repco Mt Panorama event at Bathurst, featuring 2 x 250km races.

“Heading to Bathurst for Round 1 is certainly a strange feeling but our approach as a driver won’t change,” said Winterbottom.

“Traditionally we only go there in October for the two-driver enduro but these days the 1000 is a flat-out battle anyway.

“Heading there for a sole-driver sprint race weekend is really exciting and there’s a buzz in the air with Bathurst as the season opener.”

Teammate Scott Pye’s 2021 livery will be revealed on Monday.