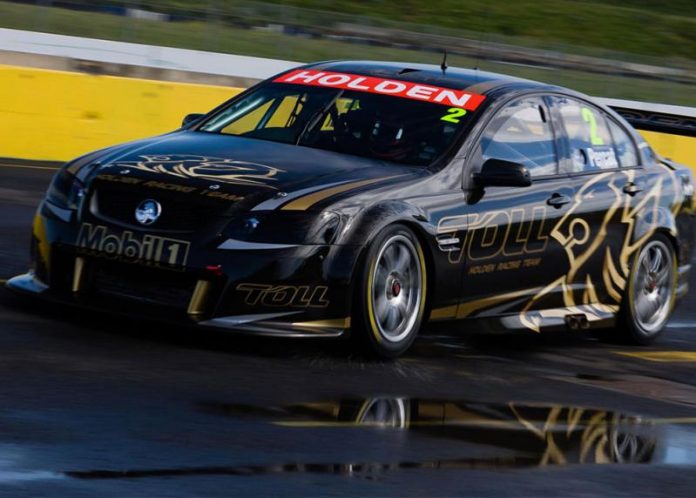 OVER the years the appearance of Holden’s factory-backed racecars has made them stand out from the rest of the racing pack.

Whether it was the red, white and black Holden Dealer Team Toranas and Commodores of the 1970s and 1980s or the various iterations of the colours carried by the Holden Racing Team through the 1990s and 2000s, Holden’s factory race cars have always turned heads.

Their many ‘regular’ colour schemes feature throughout the new book Racing the Lion: An Illustrated History of Holden in Australian Motorsport, a 400-page hardcover book paying tribute to the marque’s rich competition history spanning over seven decades.

It’s in stock in the V8 Sleuth Bookshop – order it now HERE!

But sometimes the regular colours are shelved for a weekend – or two – in order to celebrate or commemorate previous successes by some of the biggest stars in the sport’s history or set new cars apart from their brothers and sister machines.

So, let’s take a look back at some one-off factory Holden factory racing liveries that have been wheeled out on tracks not only in Australia, but also offshore, in recent years.

2010 Bathurst – HRT 1990 Retro
This was a hugely popular one! The Holden Racing Team celebrated its 20th anniversary in 1990 by donning black and white retro liveries on its pair of Commodores with car #2 driven by Garth Tander and Cameron McConville and car #22 with Will Davison and David Reynolds.

The cars looked fantastic, even down to the detail of the modern drivers names being presented on the front guards in the same font as Allan Grice and Win Percy’s were 20 years earlier!

Tander and McConville overcame a crazy day – including a near miss with a kangaroo and the driver’s door falling off in a pit stop (true!) – to finish on the podium in third place.

2006 Bathurst – HRT Brock Tribute
The death of Peter Brock impacted a lot of people in September 2006 and when The Great Race rolled around at Bathurst a month later there were numerous tributes to the icon of the sport.

The Holden Racing Team made a very simple change to its livery on both cars for the race, its pair of VZ Commodores rolling out with a black lion on their bonnets rather than the regular red outline.

Mark Skaife drove the #2 car to pole position though sadly the race was over for he and partner Garth Tander on the first lap with clutch failure.

The livery change may have not been a completely different livery and look for the whole car but it was a powerful mark of respect to a Holden hero.

2017 Sandown – Red Bull Retro
Triple Eight Race Engineering became the Holden works team in 2017 with its pair of Red Bull Commodores and for that year’s Sandown 500 ‘retro round’ they cooked up something special.

The traditional deep blue cars turned into white racers for the weekend, with retro signage, including the old Holden lion logo and period signage from supporting sponsors.

Shane van Gisbergen and young gun Matt Campbell looked on target for a podium until a punctured tyre cost them an almost certain podium finish.

2015 Bathurst – HRT Star Wars
To mark the release of the ‘The Force Awakens’ Star Wars film later that year, Holden and Disney teamed up for the 2015 Bathurst 1000 with a pair of Star Wars liveries on the Holden Racing Team Commodores.

Garth Tander and Warren Luff’s #2 Commodore featured a blacked-out livery with a new-design Stormtrooper on one side and lightsaber-wielding Kylo Ren on the other.

The force must have been with the duo on race day, as they charged through to finish third on the podium after starting a lowly 22nd on the grid.

2007 Bahrain – A Bow Tie
The Bahrain round of 2007 in the Middle East saw Todd Kelly’s Holden Racing Team Commodore VE re-liveried for the weekend to connect more deeply with the local market.

Chevrolet black replaced the usual day-glow red of Holden with a huge ‘bow tie’ added to the doors and bonnet of the #22 car, making for a stand-out one-off livery.

2006 VE Commodore – Launch Car
The VE Commodore road and race car project was a massive one with huge investment and work by Holden to turn the VE from road to race track.

The prototype VE Commodore race car, built by Walkinshaw Racing in conjunction with Holden Motorsport and the Holden Racing Team (operated by WR at the time), appeared in late 2006 in a one-off Holden livery.

With the #07 on it door to reflect the 2007 debut season of the new car, it conducted hundreds of kilometres of testing with the unique red, black and white livery before later becoming Mark Skaife’s HRT race car for the early part of the ’07 season.

2008 Bathurst – 60th Anniversary
Holden celebrated its 60th anniversary in Australia in 2008 and, to mark the occasion, a modified livery was carried on the Holden Racing Team cars at that year’s Bathurst 1000.

The red lion down the side of the team’s VE Commodores was changed to silver with ‘60’ incorporated into the bonnet livery as well.

Garth Tander took the #1 Commodore to pole position on the Saturday that year, scoring his first Bathurst 1000 pole in the process.

2015 Townsville – 1997 HRT
To mark its 25th anniversary season, the Holden Racing Team ran a range of different liveries in 2015 with the standout being in Townsville in North Queensland.

Garth Tander and James Courtney’s Commodores adopted 1997 HRT liveries – as carried by Peter Brock and Greg Murphy – for the weekend, the colours those that Brock drove in during his final season as a full-time V8 Supercar driver.

This retro livery was re-created by its original designer, Holden’s Peter Hughes.

2012 Car Of The Future – Test Car
One of the factory Holden racing liveries that really stood out, though was never used in a race, was the Holden Racing Team’s 2012-build Car of the Future Commodore.

The change of regulations for 2013 to a control chassis in V8 Supercars prompted all teams to need to build new cars for the new season, so HRT wheeled out its first ‘New Generation’ car in a striking black and gold livery.

It was used for testing and driven by the likes of Garth Tander, James Courtney and Nick Percat, though never used in a race.