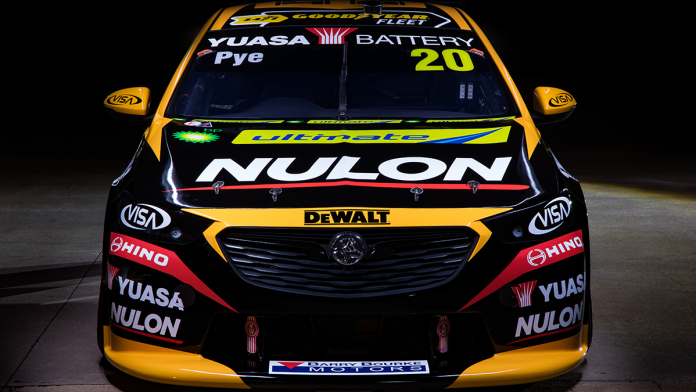 TEAM 18 has unveiled the colours that Scott Pye hopes will be a regular presence inside the top-five in the 2021 Repco Supercars Championship season.

A day after revealing the new look that teammate Mark Winterbottom will carry this year, the covers have come off Pye’s #20 Holden.

The signature yellow and black of DEWALT remain for their second season with the team, the final look the work of livery designer Nick Moss and graphics partner Ball & Doggett.

Pye was regularly the biggest mover in the field during races in 2020, but this year hopes that improved qualifying pace will allow him to convert the strong race pace into silverware.

“This season we have an opportunity to become a strong force and a team that can turn up on any weekend and be a contender,” Pye said.

“Our race pace in 2020 was phenomenal but finding that one lap speed in qualifying is a goal and if we can do that, regular podiums have to be the target.

“Going into my second season with Team 18 I feel really at home already and It’s great to know I’ll be carrying on with my engineer Phil Keed and the crew on my car to build on our learnings from last year.

“Last year sitting in the top ten as much as we did was satisfying, but that won’t be enough this year.

“We want to step up again and be consistently around the top five and aiming for podiums, and ultimately to get the team’s first race win.”

The team will retain the same Triple Eight-built chassis it campaigned last year, although Pye will have to wait a little longer than hoped to slip back into its cockpit due to the recent postponement of the Winton pre-season test.

The year’s first proper hitout for the Victorian-based teams was meant to take place on Tuesday February 16 but has been postponed to the end of the week – Friday February 19 – due to a state-wide lockdown.

Supercars is still currently scheduled to open its season on February 26-28 with the Repco Mt Panorama 500 at Bathurst.