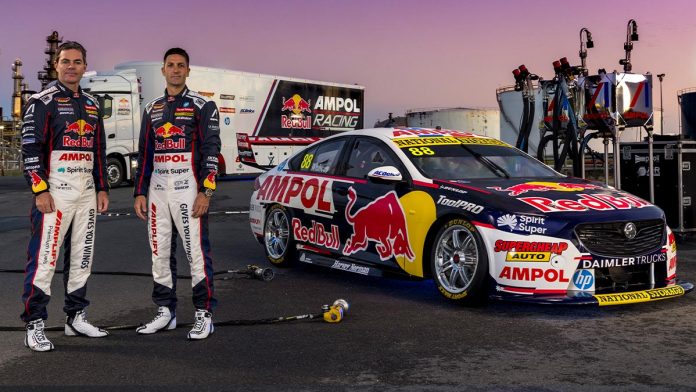 TRIPLE Eight Race Engineering has revealed the new look it will carry into the 2021 Supercars season.

The team will race under the new moniker of Red Bull Ampol Racing as the resurrected petrol brand takes over co-naming rights sponsorship of the team from the now retired Holden brand, while Supercheap Auto has also joined the team.

Jamie Whincup and Bathurst 1000 co-drivers Craig Lowndes and Garth Tander whipped the covers off the stunning camouflage blue, white and red livery at the team’s headquarters live on Channel Seven’s Sunrise program, while Shane van Gisbergen missed the launch due to being stuck in New Zealand as a result of travel restrictions.

Ampol is the longest standing partner of Triple Eight Race Engineering, having first joined the leading Supercars team in 2005 under the Caltex and Havoline oil brands.

Founded in 1936 as the Australian Motorists Petrol Company, the Ampol brand was first added to the Triple Eight cars in the middle of last year to add a new chapter to its history in Australian motorsport.

Ampol were naming-rights backers for five editions of the Round Australia Trial across the 1950s, ‘60s and ‘70s, and sponsored Sir Jack Brabham as well as several touring car teams across the 1970s and 1990s.

The decision to resurrect the Ampol brand, retired a couple of years after its merger with Caltex Australia in 1995, follows the end of the company’s deal with American petroleum giant Chevron’s over use of the ‘Caltex’ name.

Over 1900 sites around Australia will be converted to Ampol branding by the end of 2022, a process that began last year.

Along with Supercheap Auto, new additions for the 2021 season also include Daimler Trucks, Harvey Norman and ToolPro.

The new colours will hit the track at the Queensland teams’ pre-season test day at Queensland Raceway on February 12, a fortnight before the opening round of the 2021 Repco Supercars Championship, the Repco Mount Panorama 500.