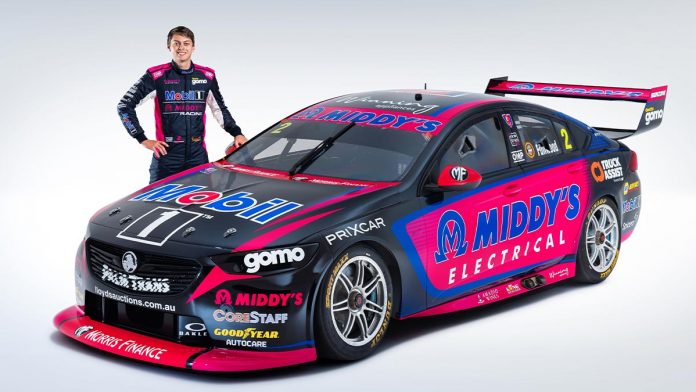 WALKINSHAW Andretti United has revealed Bryce Fullwood’s new livery for the 2021 season ahead of its first on-track outing for the year.

After two seasons with large amounts of white in its livery, the #2 Holden Commodore ZB has paired a gloss black base with the pink and blue colours of Middy’s Electrical, with Mobil 1 once again on the bonnet.

New backers for 2021 include gomo – an Optus-owned digital-only budget telco – Goodyear Autocare, Prixcar Services, Acronis, Stratasys and Signzone; the latter has been responsible for the application of the team’s liveries dating back to the early 1990s.

“To have so many returning partners back with us for another year is reflective of their support and loyalty, and we can’t thank them enough,” Bruce Stewart, WAU Team Principal, said.

“It’s also amazing to be able to welcome six new partners to our team and business this year, who will all play a part in our journey; we welcome them with open arms to our family.

“We look forward to an exciting year with Bryce, where he can continue his momentum and Supercar development. This young man has genuine speed, and we’re right behind him in converting that speed into heightened results.”

The new livery will hit the track at Winton today as Fullwood completes the first of three rookie test days for 2021.

Although last year was the Northern Territory product’s debut full-time Supercars season, a rule introduced at the start of 2020 means second-year drivers can also use the three extra test days previously only afforded to rookies.