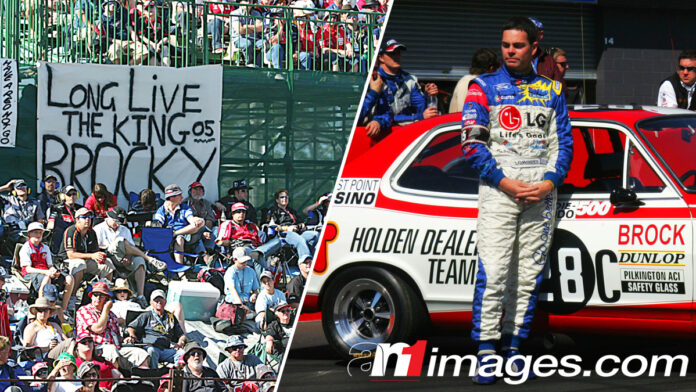 OCTOBER 8, 2006 will forever remain one of the most emotional days in the history of the Bathurst 1000, and indeed Australian sport.

The Great Race took place in the shadow of Peter Brock’s death, which occurred exactly one month earlier during a tarmac rally in Western Australia.

A series of tributes throughout race week culminated with a moving ceremony on the grid, before Brock’s protégé Craig Lowndes led Triple Eight to a famous victory.

V8 Sleuth remembers the day with this special gallery from the AN1 Images archive, featuring the work of photographers Justin Deeley and Dirk Klynsmith.

Race week included the unveiling of the new perpetual Peter Brock Trophy, which had been produced by Hardy Brothers Jewellers and arrived at the track by charter plane.

Dick Johnson and Jim Richards were given the honour of revealing it to the media.

Holden and HSV’s initiatives included running black bonnets on the Holden Racing Team cars and providing this Commodore for fans to pen their tributes.

The car sat in the Holden merchandise area throughout race week. It still exists today in the hands of a private collector.

Fans also left tributes to Brock on the wall at ‘Brock’s Skyline’ atop Mount Panorama.

Spectators packed the front straight on Sunday morning ahead of the pre-race ceremony. A weekend crowd figure of 193,647 was at that point a record.

The pre-race formalities were highlighted by Craig Lowndes driving Brock’s 1972 Bathurst winning Holden Torana, following permission to do so from Ford.

Beverly Brock and family were also present for the ceremony, which included a minute’s silence and a rendition of the song ‘Heroes’, sung by Iva Davies.

The front-row of the grid for the Great Race was left vacant as a mark of respect to Brock.

Although the race was a disaster for Holden, it seemed only fitting that Lowndes – along with co-driver Whincup – became the first to hoist the new Peter Brock Trophy.