Home Galleries GALLERY: YOUR GUIDE TO ALL THE 2022 SUPERCARS LIVERIES 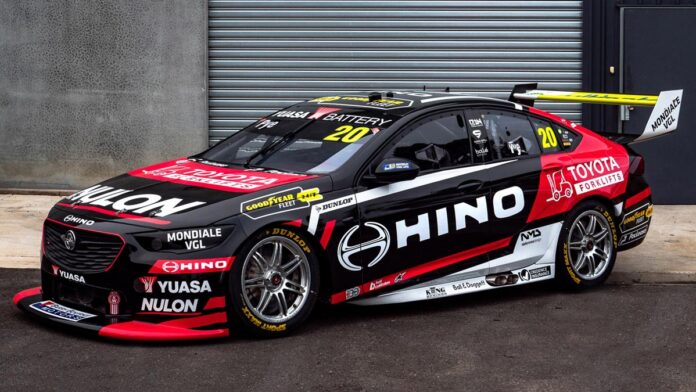 THE Repco Supercars Championship may be underway but there are still plenty of new liveries to be revealed throughout the 2022 season.

Here’s a full rundown on every livery revealed by Supercars teams so far.

WHERE AND WHEN: Supercars’ latest 2022 season calendar

DAY AND NIGHT: Race formats for the 2022 Repco Supercars Championship

It’s evolution rather than revolution for the reigning Drivers and Teams Champions with Triple Eight set to race in familiar colours in 2022.

The new Red Bull Ampol Racing livery blends notes from the colours carried across each of the last two seasons, although a notable addition is former DJR Team Penske backer Wurth.

Dick Johnson Racing’s Fords will roll out in 2022 wearing a livery that has become very familiar to Supercars fans since the start of the 2017 season.

This year’s design retains the subtle change to a white rear bumper that first appeared as part of last year’s ‘Racing Together’ indigenous livery.

Courtney’s Mustang took part in the pre-season test at Winton with a largely black livery, with no primary sponsor yet announced for Tickford’s #5 entry.

The 2010 series champion will carry the colours of four-wheel drive accessories store Opposite Lock at the opening round of the 2022 season.

It’s a deal that is an extension of Tickford’s existing partnership with Bapcor, Opposite Lock’s parent company, which began last year with Autobarn and Chicane Tools backing on the team’s cars.

Courtney gets a number change for Albert Park in honour of his 500th ATCC/Supercars Championship race start – slated for the opening race of the Melbourne 400 weekend – along with a new backer in the form of FLEX Power Tools.

The company, which is new to the Australian market but has a history dating back to 1922, specialises in the industrial power tools sector, with a wide range of products including grinders, sanders, polishers, and more.

“It’s a bit of a bonus because I’ve been doing some work on the house up in Queensland – I’d be lying if I said there weren’t a few products that caught my eye, so we’ll keep that chat going,” Courtney joked.

Waters, Tickford and Monster Energy continue into 2022 with one of the longest-standing driver/team/sponsor partnerships on the Supercars grid.

The combination are embarking on their seventh season together with a refined livery in the energy drink company’s signature black and neon green hues.

Castrol returns to the Supercars as a primary sponsor for the first time in two seasons, having backed Randle’s wildcard appearances last year.

The move continues a relationship with Tickford that dates back to the team’s inaugural season as Ford Performance Racing in 2003.

Kostecki will race in fresh colours for his first season with Tickford, with the #56 Mustang to wear the colours of workwear and lifestyle brand TRADIE in 2022.

“When we first partnered with Tickford in 2018 we talked about how we’d love to have fully-branded TRADIE Supercar someday, so to see this become reality is a dream come true,” Ben Goodfellow, founder and CEO of TRADIE, said.

“We’ve had a fantastic relationship with the team at Tickford and have had a lot of fun showcasing our brand and products in one of Australia’s biggest sports, and we can’t wait to take it up a notch this year with Jake driving the TRADIE Racing Mustang.

“TRADIE undies & workwear have covered the team’s rigs at Tickford over the last few years, so to have our own Tickford rig is going to be very special.”

WAU’s returning pilot will run a sharp silver, black and white livery for his first Supercars season driving for the team since 2014.

Along with NTI stepping up to be this car’s co-naming rights partner with Mobil 1, the other notable feature of the livery is the return of a number on the door.

The reigning Repco Bathurst 1000 winner will run a tweaked livery in 2022 with a notable change of sponsor.

Optus, who joined the team last year with its GOMO brand, has stepped up to join Mobil 1 as the #25 entry’s naming-rights partners.

Boost Mobile has expanded its support to both Erebus Motorsport entries for 2022 after backing only Kostecki’s car last year.

“This year marks ten years for Erebus and it’s been an amazing journey thus far, and we can’t wait to see what this season holds.

“We are proud to represent every one of our partners and their support reflects the confidence they have in our team.

“We can’t thank everyone enough for their support and we can’t wait to get the season underway.”

The SCT Logistics car will carry a very tidy livery for Smith’s third full-time season in the Repco Supercars Championship.

A splash of red and black has been added to the tail of the primarily white #4 Holden, plus more black on the front bumper and splitter.

The name on the window is the biggest change for BJR’s #8 Holden in 2022 with R&J Batteries continuing as this entry’s primary sponsor.

“Motorsport is in our DNA, so we are proud to be taking on naming rights with BJR once again and extend our agreement with Brad and the team into 2022,” Stuart Hamilton, chief executive officer of R&J Batteries, said.

The updated livery retains the white, red and black as its primary colours, while the bonnet sponsor is expected to rotate during the year.

For the opening rounds at SMP and Symmons Plains, Cub Cadet took the place on the #8 Holden’s bonnet, while Scandia took over for the Albert Park, Wanneroo and Winton rounds.

Fullwood’s long-time backer Middy’s has moved with him to BJR for the 2022 season, with their colours set to adorn the #14 Holden for the full championship calendar.

“As a long-standing supporter of Bryce from his early racing days we are proud to be able to continue this 10 year relationship,” Middy’s director Nicholas Middendorp said.

“Middy’s is looking forward to working with Brad Jones Racing, whose business is built around similar values to Middy’s – being a family-owned and run operation.”

However, Fullwood won’t race in his main season livery until Symmons Plains – BJR revealed a one-off livery for the opening round at Sydney Motorsport Park.

After running a black and electric blue livery at the Sydney SuperNight, Fullwood will roll out in his regular season livery at Symmons Plains – and what a livery it is!

The #14 Holden will take on predominantly hot pink in deference to sponsor Middy’s Electrical, ensuring that Fullwood will be impossible to miss on-track in 2022.

“The blue and pink of the night livery was stunning,” Middy’s director Nicholas Middendorp said.

“But I think everyone will agree this car is a showstopper!”

The #96 entry is the only entry in the BJR stable running a rotating naming rights sponsorship model in 2022.

Jones will start the season with Automotive Superstore backing, the auto parts store which appeared on Erebus’ #9 entry last year.

The bonnet features additional backing from Tools.com, which was the primary sponsor of Todd Hazelwood’s BJR car at the second Townsville round in 2021.

After appearing on the bonnet of the #96 Holden at the opening two rounds of the season, tools.com takes over as primary sponsor of Macauley Jones’ entry for the Melbourne 400 with the same monochrome look that adorned BJR’s #14 car in mid-2021.

Winterbottom and Team 18 enter their fourth season with IRWIN Tools as the primary sponsor of the #18 Holden.

This year sees a revised livery with increased backing from Bunnings on the rear guards.

“It is exciting to see the blue and yellow colours on the Team 18 race car again this year, the IRWIN brand has a huge year ahead and it will only be strengthened by the presence at the track,” Daniel Keyse, marketing director at IRWIN Tools’ parent company Stanley Black & Decker, said.

“Our exclusive partnership with Bunnings Warehouse has continued to prove extremely beneficial for both parties and we are looking forward to a successful season.”

“This year we have seen a lot of work going into the cars, the livery but thankfully, the driver and the personnel have not changed much – some things, we know, needs no changes.”

With Team 18 yet to reveal the primary sponsor of the #20 entry for 2022, Pye took part in the pre-season test at Winton with a plain black livery on the second Team 18 Holden.

Pye will start the season in the colours of watchmaker Seiko, with the opening round at Sydney Motorsport Park coinciding with the release of its Seiko 5 Sports Supercar watch.

The team referred to the livery as being “for the commencement” of the 2022 season – whether this livery will only be for the SMP round or extends beyond that remains to be seen.

Like Seiko, Hino had previously been a minor sponsor of the #20 Team 18 Commodore and is an official Supercars Championship partner.

After several years of running different primary sponsors across its entries, this team will field both cars in Penrite colours for its first season under the Grove Racing banner.

Both Lee Holdsworth and David Reynolds liveries are almost identical, but there are a couple of tell-tales to identify one from the other – apart from the different numbers.

Holdsworth has white trim around the grille and on the rear wing endplates of his #10 Mustang, while Reynolds’ #26 Mustang has red trim.

Another team to adopt identical liveries across both its cars is Matt Stone Racing, who have inked a multi-year deal that sees Truck Assist become the team’s naming rights partner for the 2022 season.

Supercars’ newest team will have one of the world’s biggest brands on one of its cars with Pither set to race a Coca-Cola backed car in 2022.

“Supercars has huge nationwide reach with an engaged fan base across Australia, appealing to a broad range of our customers and consumers,” Jarrad Mortimer, director of sales at Coca-Cola Europacific Partners Australia, said.

“We have a relationship with Supercars and Australian motorsport that goes back over 50 years, and we are very excited to play a part in this new chapter with Premiair Racing.

“The livery looks fantastic, and we are excited to get the season underway.”

PremiAir Racing’s second entry will also carry the colours of a major global brand with Subway sponsoring the #76 Holden for the opening rounds of 2022.

“With over 1,200 restaurants across the country, Subway is fuelling more Australians with even more fresh options than ever before,” Rhys Reynolds, Subway Australia & New Zealand communications manager, said.

“We’re excited to partner with PremiAir Racing to bring our fast, fresh, nutritious options to the track.”

After initially signing on for only the first two rounds, PremiAir Racing secured an extension for two more rounds.

“I think the car has looked amazing from day dot, so if it ain’t broke, don’t fix it.”

It’s hard to go past Slade’s description of the #3 Mustang’s 2022 livery, which is identical to last year’s livery with the exception of a few new team partner logos. The biggest change is under the bonnet; the team is sourcing its engines from Herrod Performance Engines (nee Mostech Engines) after using Tickford units in its debut season.