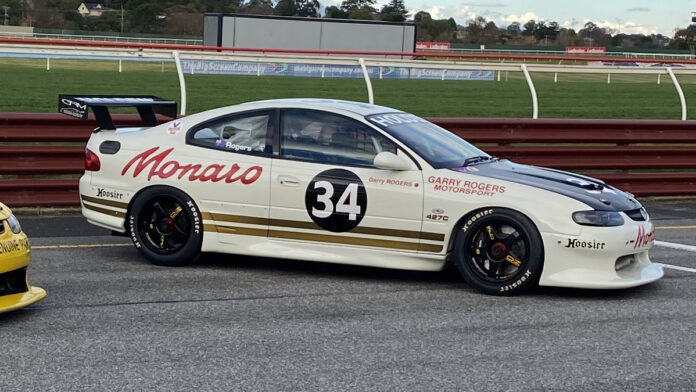 The car, presented in a late 1960s Monaro-themed livery inspired by the first HDT Monaro driven at Sandown in 1969 by Spencer Martin and Kevin Bartlett andcdesigned in conjunction with the team by Peter Hughes, was given a brief run at Sandown yesterday – GRM engine man Jeff ‘Gypsy’ Marshall given the first crack at spending time behind the wheel before James Moffat and Dylan O’Keeffe both drove.

Built to the same specification as the Bathurst 24 Hour-winning Monaros that competed in the Nations Cup category in the early 2000s, the new Monaro differ from its predecessor cars and be run on Hoosier tyres instead of Dunlops.

The new car has been built from a VZ Monaro body shell after earlier plans to use a shell stored by GRM were shelved.

Otherwise, the car has been built to the same spec as the seven-litre V8 Monaro Nations Cup cars that the team ran in the early 2000s.

Originally planned to make its debut at last November’s canned Bathurst International, the car is the fourth Nations Cup-spec Monaro to be constructed.

The first ‘yellow’ car won the 2002 Bathurst 24 Hour and was pulled apart and used for reference purposes for the creation of the latest car. It was raced by Nathan Pretty in the 2003 and 2004 Nations Cup seasons.

The second ‘red’ car won the 2003 Bathurst 24 Hour and was funded and owned by Ross Palmer, while an additional red car was built and raced by Team Brock in 2004 with both James and Peter Brock spending time at the wheel.

The new car is intended to be sold by GRM at some point in the future.