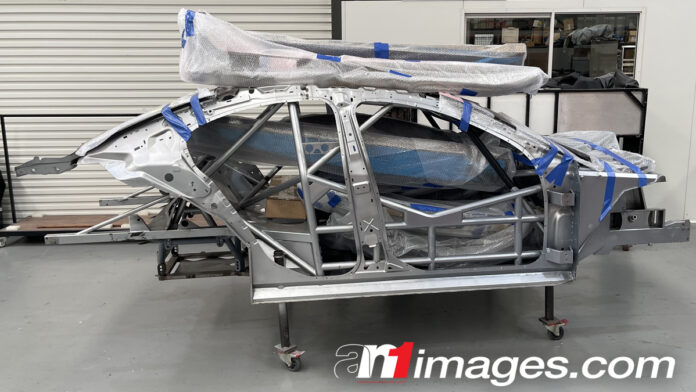 GARRY Rogers Motorsport has continued to divest itself of its former Supercars Commodores with the news that it has now sold one of its VF Commodores to an overseas buyer.

Englishman Alex Sidwell is adding the car to his ever-growing collection of Supercars.

He’s acquired chassis GRM 022, one of a batch of four Commodore VF Car of the Future-era Supercars built by GRM in 2017 after its deal with Volvo ended.

GRM 022 was driven by Mason Barbera in the 2017 Dunlop Super2 Series and also used by James Golding that year as GRM’s wildcard entry at Winton alongside its existing ‘main game’ entries of Garth Tander and James Moffat.

Sidwell’s new purchase, which is being sent to England as a bare chassis with no engine, gearbox or running gear, will be used as a spare.

The purchase is timely given a recent accident at Silverstone that saw his ex-Brad Jones Racing Commodore VF receive major damage. That chassis is to be sent back to BJR in Albury to be properly repaired.

GRM still has three of its most recently used Supercars – the VF driven to the Super2 title by Chris Pither in 2018 and most recently raced by Dylan O’Keeffe in 2019, and the pair of ZB Commodores it used in its last Supercars Championship season in 2019.

One of those cars, the 2020 Bathurst wildcard car driven by Tyler Everingham and Jayden Ojeda, is currently on display at the National Motor Racing Museum at Bathurst.

The team sold one of its other VF Commodores to Jon McCorkindale earlier this year for his step up from Super3 to Super2.