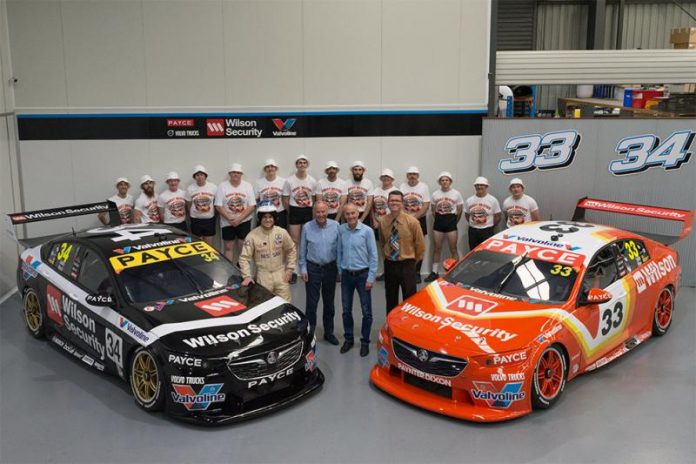 GARRY Rogers Motorsport is the latest squad to reveal the retro-inspired colours their cars will run at this weekend’s Sandown 500.

The team took the wraps off their ZB Commodores today to reveal the liveries that pay tribute to two of the cars Garry Rogers drove during his touring car career.

The #33 car of Garth Tander and Chris Pither will wear the bright colours of the Holden Torana A9X that Rogers drove in his Bathurst 1000 debut in 1978, while James Golding and Richard Muscat’s #34 channels the ‘Soundwave’ Commodore that Rogers drove alongside Clive Benson-Brown in the ’83 edition of The Great Race.

The ’78 Torana celebrates 40 years since the GRM team owner made his Bathurst 1000 debut alongside the late Ian ‘Pete’ Geoghegan.

Rogers acquired the car from Bob Jane ahead of the endurance classic, however only completed 29 laps of the 163-lap distance after suffering engine dramas early on.

That particular car was destroyed in a crash at Amaroo Park in 1979.

The colours of the striking A9X have been painted onto Tander’s modern day machine after a match for the orange couldn’t be recreated in vinyl wrap!

Meanwhile the #34 machine celebrates the ’83 Soundwave Commodore that Rogers qualified seventh in his fifth straight appearance in Hardies Heroes (the Top 10 Shootout).

He went on to finish 12ththe next day alongside Clive Benson-Brown after the pair also ran the same VH Commodore at the 1983 Sandown enduro.

While the car carried #11 in the Sandown and Bathurst enduros in ’83, it actually carried #34 with Rogers driving in the touring car support race at that year’s Australian Grand Prix at Calder – meaning the retro livery will line up with both period livery and indeed racing number!

His GRM team has competed at Bathurst from 1996 onwards, even competing twice in 1997 in both the V8 Supercar and Super Touring 1000-kilometre races.

The two retro GRM Commodores will hit the track this weekend for the Sandown 500 from September 14-16 with the race set to kick off at 1.20pm on Sunday with live coverage on both Network 10 and FOX Sports.