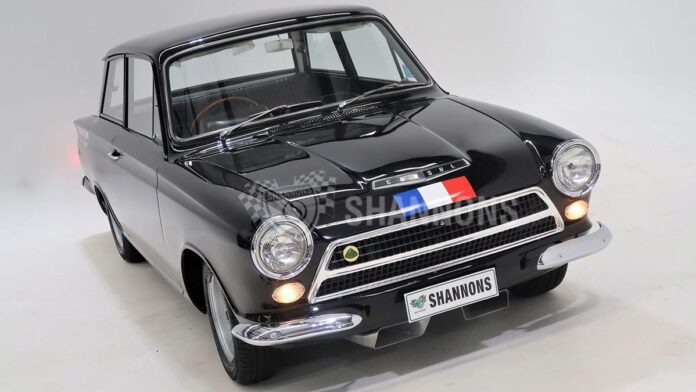 AN EARLY piece of Australian Touring Car Championship history is up for grabs, with the auction of an ex-Ian Geoghegan Lotus Cortina.

According to information compiled by Shannons ahead of the start of the online auction tomorrow, the car was first raced by Geoghegan in Total Team colours at Catalina Park in December 1964.

It had been one of three works prepared Lotus Cortinas imported by Ford Australia and was pre-sold to the Geoghegan family, who were Lotus agents in Sydney.

The Lotus Cortinas featured a 130bhp twin-cam engine tuned by Colin Chapman’s famous operation, as well as a close-ratio four-speed gearbox and a limited-slip differential.

This car effectively replaced the Team Total Cortina GT driven to victory in the 1964 ATCC by Geoghegan; his first of five ATCC titles.

The Lotus Cortina’s most high-profile outing in Geoghegan’s hands was the ATCC at Sandown in April 1965, when he drove it to second place behind Norm Beechey’s Mustang.

Other circuits visited included Warwick Farm, Lakeside and Bathurst, where it contested the Improved Production Touring Car race at the Easter meeting.

The car’s career with the Total Team ended shortly after the 1965 ATCC race when Geoghegan rolled it at Catalina Park and subsequently switched his attention to a new Mustang.

The Cortina was repaired and sold to Queenslander Frank Melit, who raced it briefly before it was traded to Blair Sheppard Cars of Brisbane and registered as a road car.

New owner Geoff Digby used the car on the road and also took it drag racing.

Digby sold it in 1988 to noted Ford collector and Lotus Cortina expert Graham Mein, who commenced a ground-up rebuild that was completed in 2014.