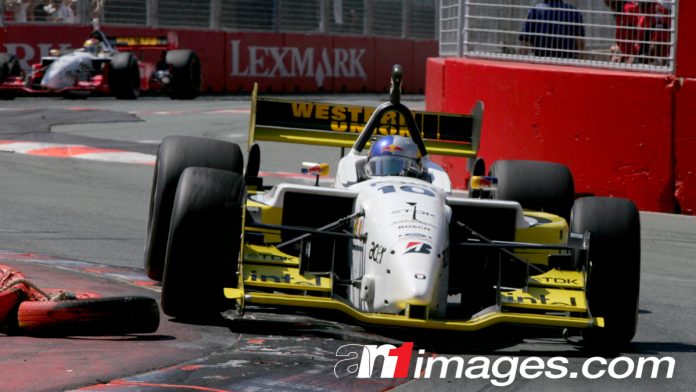 THE streets of Surfers Paradise would normally be revved right up this time of year for the annual Gold Coast 600 Supercars event.

However, given COVID-19 has changed the world, the Gold Coast won’t host top level motorsport in 2020 at its annual street circuit event, one that started with the CART IndyCar Series back in 1991.

Over the years a range of race cars have competed on the unique concrete-lined street course, but it’s the IndyCar/Champ Cars that are probably remembered the most given they were the drawcard act from 1991 through to 2008.

The V8 Sleuth team is always scouring the world for where race cars have ended up and we’ve found a few cars that competed in those Gold Coast Indy races on the market in North America.

One of them is the 2005 Gold Coast Indy runner-up, a Lola B05/00 Champ Car run by the RuSport team and driven to second place in the ’05 Australian event by American A.J. Allmendinger.

Allmendinger finished second to Sebastien Bourdais in the car, which is for sale now via Can-Am Cars in the United States.

It was driven by Allmendinger and Cristiano da Matta during the 2006 Champ Car season and we’re seeking clarification if perhaps it’s also the same car that Ryan Briscoe raced for RuSport on the Gold Coast in that same year.

Can-Am Cars also has for sale a sister RuSport chassis, a 2003-built Lola that also comes less engine and electronics, plus a Newman-Haas 2005 Lola that we understand was driven by Oriol Servia as well as an ex-HVM Racing Lola used by Brit Dan Clarke in 2006.

The Lola Champ Car proved the mainstay of the category from 2006 to 2006 with the same base chassis used throughout.

Smaller runs of new tubs were produced as the years went by and the car was phased out at the end of the 2006 season in favour of the Panoz DP01 that ran for a single season in 2007 prior to the unification of Champ Car and the IndyCar Series for 2008.