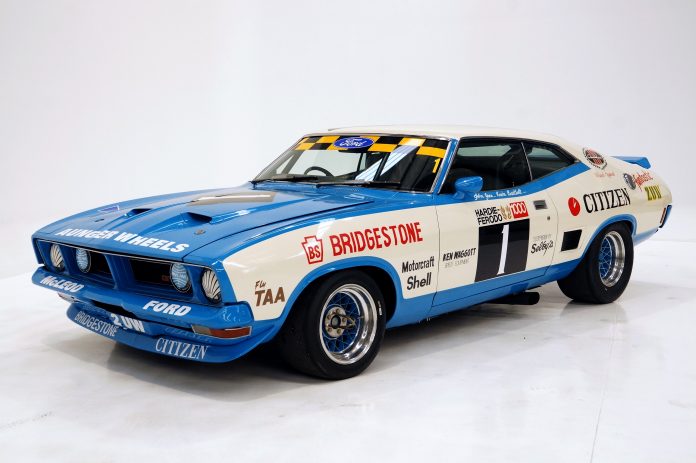 THE ex-John Goss 1975 Bathurst Falcon XB GT has been sold just a week after it was listed for sale in the V8 Sleuth Online Showroom.

The car, co-driven by Kevin Bartlett in ‘The Great Race’ 45 years ago alongside his 1974 winning partner, has been sold to Melbourne-based GT Falcon collector Darren Green.

If you’re looking to sell your race car, contact the V8 Sleuth team here to discuss advertising options and we can add your car to the Online Showroom with an inclusive package reaching a huge audience.

Built in 1975 by Goss’ Sydney-based team, the mighty V8 Hardtop has been restored to its 1975 Bathurst 1000 livery as raced in that year’s Mount Panorama classic by 1974 race winners Goss and Bartlett.

The very same car also helped Allan Moffat claim the 1976 Australian Touring Car Championship, Goss graciously offering Moffat use of the car after his own Falcon was burnt to the ground in a transporter fire heading to the Adelaide round of that year’s championship.

Moffat went on to win both races at the Adelaide International Raceway round in Goss’ car and then ran home second at Lakeside, the points crucial in helping him seal his second Australian Touring Car Championship crown.

Goss and Jim Richards raced the car at Bathurst in 1976 before it was upgraded from XB GT to XC specification for the ’77 race and driven by Jack Brabham and son Geoff.

Goss continued to race this chassis in 1978 and it was later raced by privateer Rod Stevens in 1979.

The restoration of this important piece of Australian muscle car history was completed in 2005.

Original owner/driver John Goss has driven the car since its restoration and has given the car his endorsement.

“13182 is set up with original Bathurst gearing and since completion of the (restoration) project I have enjoyed numerous full speed exhibition stints, supporting major events at Bathurst, Eastern Creek, Symmons Plains and the DECA Proving Track,” he said in 2010.

“At the end of the day 13182 has been carefully overhauled and returned to its original 1975 Bathurst specification and I have no hesitation in endorsing the provenance and authenticity of this iconic machine.”