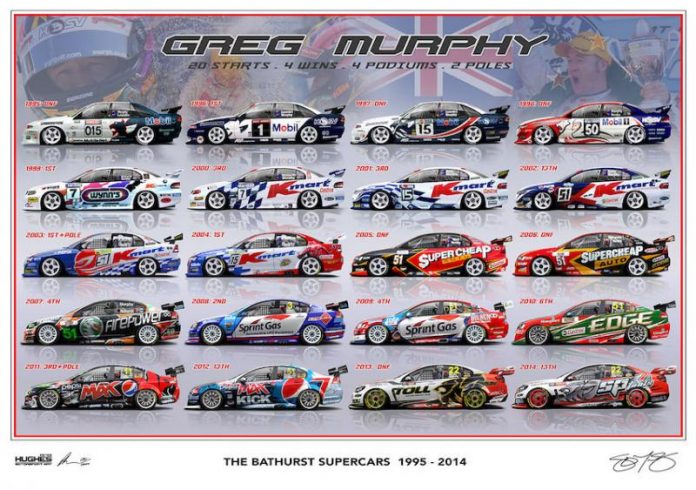 The print by acclaimed designer Peter Hughes is the latest in a long line of motorsport artwork celebrating Holden’s racing heritage to be released by Hughes, who is better known for his exterior design work at Holden Design in Fisherman’s Bend.

Officially endorsed by the man himself, each print will be individually numbered and personally signed by Greg Murphy.

“I’ve always admired Murph for being loyal to Holden throughout his Supercars career and his Bathurst record is particularly impressive,” says Hughes.

“My connection to him goes back to 1997 when he drove his first full season in Supercars, in the very first HRT livery I designed.

“He took the time to send me a nice note back then, saying how cool he thought his new car looked.

“I loved his passion for what he did, the Holden brand, the emotion he brought to the series and the way he rose to a new level at the Mountain.”

Exclusively available through the V8 Sleuth Online Store, each print measures a large 840mm by 640mm and is produced on 250gsm matte finish stock for a high quality feel.

The V8 Sleuth Online Store also announced today that for the first time the new print would be available to customers in New Zealand.

“Murph is virtually the king of motorsport in New Zealand and his Bathurst record is very, very impressive stacked up against some of the greatest drivers of all time at the Mountain,” says V8 Sleuth’s Aaron Noonan.

“V8 Sleuth has a huge following in New Zealand and we’ve had issues with shipping to Kiwi customers in the past, however they have been sorted now so this print, plus others in our store, are now available for those ‘across the ditch’ to purchase.”