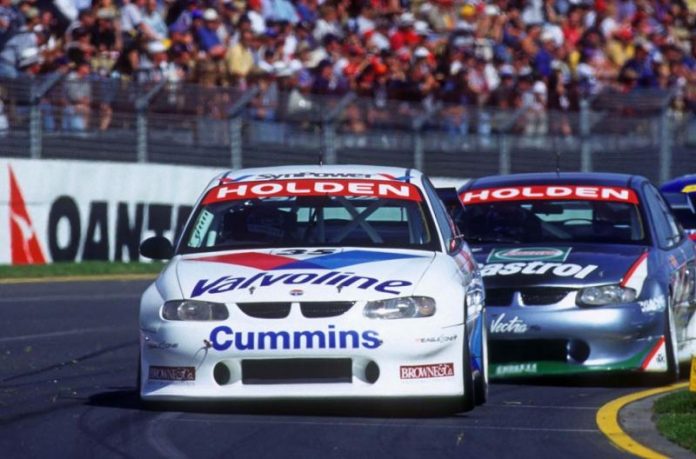 MUCH has been made this year of Garry Rogers Motorsport moving back to racing Commodores in this year’s Virgin Australia Supercars Championship after three seasons racing the unique Volvo S60s.

The team constructed four brand new cars for this year for both the ‘main game’ and Dunlop Super2 Series, the latest of 22 Supercars built in-house by GRM over the its history.

It’s therefore appropriate to wind back the clock and look at the very first Supercar the team built – GRM VT01/98 – which ended up being a double round-winning car in the hands of Jason Bargwanna in the familiar Valvoline Cummins colours of 1999/2000.

Even more newsworthy is the fact that it’s recently hit the market for the first time in over a decade!

To view full details about the sale of this car, click here to go to our V8 Sleuth Classifieds page.

Debuted in Bargwanna’s hands at the Albert Park Grand Prix event in 1999, this car was the first Supercar built by GRM and followed on from a handful of VS Commodores that the team had purchased from Gibson Motorsport and the Holden Racing Team in preceding years.

Their first VT scored round wins at its home test track at Winton in 1999 and 2000 with Bargwanna driving and was also runner-up in the Symmons Plains round in ’99 and the ’00 Clipsal 500 behind teammate Garth Tander.

It was Bargwanna’s regular car throughout the 1999 and 2000 seasons, though he joined Garth Tander in the sister chassis (VT02) for the endurance races each year, including the victory at Mount Panorama in November 2000.

VT01 gave both Steve Owen and Greg Ritter their V8 Supercar debuts in the ’99 endurance races, the duo finishing ninth at Bathurst.

It also ran at Mount Panorama in 2000 with Ritter and then-Formula Holden race winner Tim Leahey, though did not finish with overheating problems.

GRM built a pair of new VX Commodores for 2001 and VT01 became Leanne Ferrier’s (now Tander) #33 car in the team’s foray into the Konica Series with a podium in the opening round at Wakefield Park the first such result by a female in V8 Supercars.

Ferrier ran the car throughout the Konica Series and teamed with series competitor Paul Dumbrell in it for the Queensland and Bathurst endurance races where it became car #35, though updated from VT to VX specification.

The car sat idle for a few years (though it was used at the end of 2005 for a GRM end of season ride day) before being sold to Mal Rose, who took it to Malaysia to compete in the 2007 Sepang 12 Hour with Ric Shaw and Layton Crambrook as co-drivers.

It’s never raced since and, after owning this great piece of GRM/Valvoline racing history for just over a decade, Rose has decided to place it on the market via V8 Sleuth.

“The car has only raced once in the time I’ve had it and the engine went after four hours in Malaysia, so Garry (Rogers) kindly rebuilt it for me,” says Rose.

“The engine has only done one test day with no racing miles and this car actually has the suspension from the 2000 Bathurst-winning car in it as Garry brought it back to Melbourne to remove the running gear in order to give me a spares package.

“I started the restoration of the car some years ago but due to a busy family life and other work commitments I just can’t get the time to put into finishing off this project.

“It’s the perfect car for the Heritage Class of the Kumho V8 Touring Car Series as well as ideal for the Australian Five-Litre Touring Car Association’s events and a smart investment given it’s a case of when, not if, these cars have Historic classification in the years to come.”

To view full details about the sale of this car, including price, click here to go to our V8 Sleuth Classifieds page.